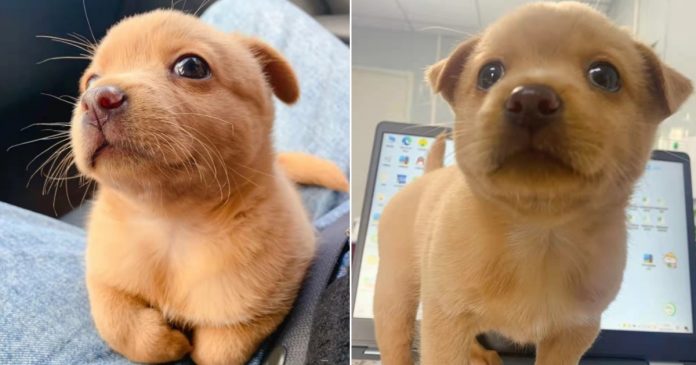 Sleeping on the job, but you still get paid! That is the kind of dream job that most people want. A netizen picked up a stray dog ​​at the gate of a worksite a few days ago. Although it is an ordinary little yellow puppy, it is quite soft but looks arrogant. The netizen decided to adopt it without hesitation. At home, the puppy was named, “Tower Crane,” since it was a female.

The netizen first took the puppy to a nearby veterinary hospital for a check-up and confirmed that there were no suspicious health conditions. After getting the consent of the boss, he would bring Tower Crane to the construction site every day. Unexpectedly, Tower Crane has unconsciously become the mascot there… eating, drinking, and sleeping. Those were her only jobs. Though she sleeps all the time, she motivates her new owner’s colleagues from time to time!

Tower Crane sleeps all the time, and when she is awake, she has an arrogant look just like a seal. When she is wide awake, she explores curiously. She has a good relationship with her new owner and likes to sleep on his chair beside him. The photo would really touch people’s hearts!

Cute Tower Crane actually folds itself like a little kitten. Sometimes her round eyes are matched with an arrogant expression, and she looks a bit like a sea lion!

After Tower Crane got acquainted with the environment, she would go outside enjoy the scenery by herself. Her owner’s colleagues are very fond of this lively and cute puppy. Sometimes when Tower Crane gets tired from playing, you will find her asleep in a corner and sleeping comfortably. I wonder how she feels sleeping with a twisted neck like this?! 😆

Caught being lazy and dozing off during work hours? The boss should deduct her salary! 😂

The employees are so happy to have such a cute dog spreading positive energy during work hours.