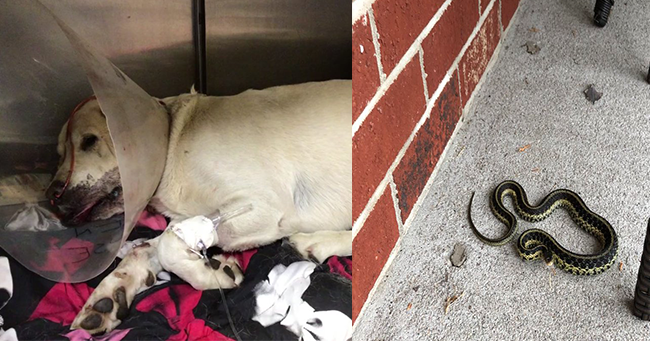 Various stories of loyal dogs are heard from time to time, and here is one that has happened just recently. More often than not, they are called “hero dogs” because they rescue their owners one way or another.

In California, USA, a dog saved his owner from the attack of a rattlesnake with its deadly venom, unfortunately, he was bitten by the snake. Luckily, after treatment, this loyal dog managed to fully recover.

The incident occurred at a house in San Diego on June 10. The parties involved were 18-year-old Alex Loredo and his 7-year-old Labrador, Marley.

As soon as he was near the washing machine, he heard a loud rattling sound. A rattlesnake was lurking under the table about 30cm. from him.

Alex told NBC TV: “Before I could get away, Marley rushed out the door, pushed me, and then stood between me and the snake.”

At that moment, Alex was so confused, his heart rate jumped. He and his mother immediately took Marley to the veterinary clinic for emergency treatment. He was also worried that Marley would die in the car.

When they arrived at the veterinary clinic, it didn’t have antivenom, so they drove another 25 minutes to another clinic.

After being given several doses of antivenom, Marley was hospitalized for observation for two nights. His face was swollen, his mouth was bleeding, and he was having trouble breathing.

Alex said it was the scariest moment of his life, and he didn’t know if his best friend would survive that time.

He told NBC TV: “This is the longest time I’ve been apart from him, so it’s been a very sad experience for me.”

But he says that after two weeks of treatment, Marley has completely recovered and is back to being a cheerful dog. Apart from being his best friend now, Marley had also become a hero in his life.