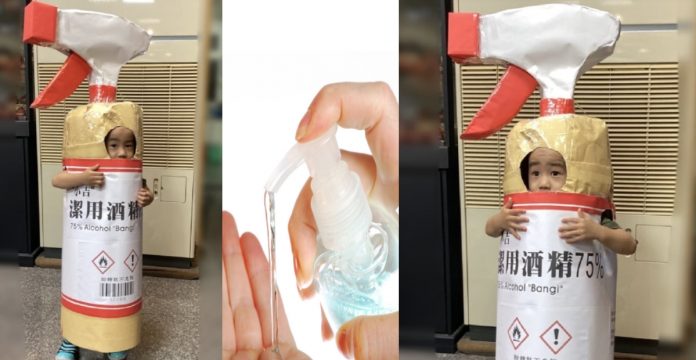 Halloween is coming soon! Have you figured out what costume to wear that day and spend a hilarious and unforgettable holiday with your family and friends? In addition to adults having parties at Halloween in Taiwan, many schools also require children to participate in the “Trick or Treat” activity, which makes many parents come up with different styles of costumes for their children, each more unique than the others!

In such circumstances, there are still some peculiar baby Halloween looks every year, which makes the kids feel impressive at first glance! This year, a mother shared a post on the Facebook page “MyUDN”, showing the clever invention of the father for his son. After sharing their creativity, they did not dress their child as an ordinary witch or cartoon character, but as an “alcohol bottle spray.”

Would you feel shy attending trick or treat being an alcohol bottle? In the following pictures, this handyman father at home has made his son’s Halloween costume into the most commonly used alcohol spray bottle used by everyone’s home these recent years. The red and white nozzles are three-dimensional, but there are holes for the arms to come out. It looks sturdy. The post on Facebook immediately attracted more than 10,000 praises from netizens.

It can be seen in the photos that the boy transformed into an alcohol bottle baby, except for the big “disinfecting alcohol” and “75%” on the front, the other brand names have been changed to his son’s name “Xiao Ji”, and the warning slogans are also restored. At first, people who passed by thought that his costume was an illuminating lamp.

Even when he temporarily took off his costume and put it on the ground, it really looks like the plastic alcohol bottle you usually spray, especially when you look closely at the slogan, there is the warning sign “Flammable: Dangerous”, which is the line of the original product, and also the combinations of Halloween slogans. His Dad has a creative mind!

Wait, there’s more! When the boy turned his back wearing the alcohol bottle costume, even the instructions were very much detailed! The component column was changed to “Worry-free: 100%”. The following remarks were also very detailed and the costume is good enough to take pictures for sharing, and having the effect of worry-free instructions can also be achieved. I want to be the first to take a photo after reading this. 😆

It’s not the first time this family’s done unusual costumes for Halloween. Last year, the boy’s father had the idea of disguising his sons as a telephone pole and a traffic cone. According to reports, this clever father used to study fine arts when his wife was still pregnant. Later, he came up with Halloween costume ideas, and netizens were quick with their praises: “Dad is so talented”, “Very focused on art”, “The most current Halloween styles!”

This article made me feel like celebrating Halloween and enjoying the festivities! Both the appearance and the slogan in the costume are in place, I really want to collect a set of sanitizing alcohol. 😆