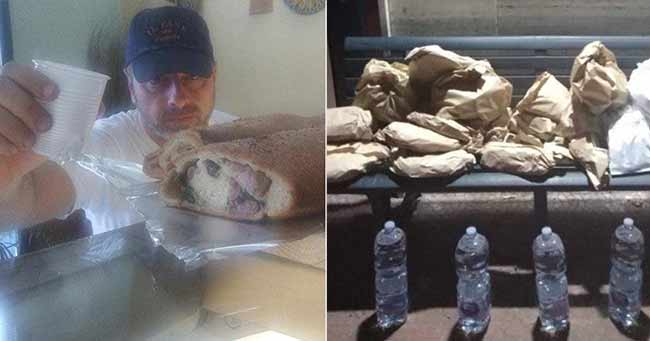 For more than 19 years, a baker in Sicily, Italy, has been called an angel by the people in his community for helping the people in need. A little food to survive the longs nights was all they needed to satisfy the hunger of less fortunate people.

For Fedele Termine, 45, bakery owner, generosity is one of the most important values an individual must possess, knowing that we are in a changing world where not everyone has the same opportunities. Some unfortunate citizens don’t have the blessing to eat something before retiring at night.

That’s why Fedele Termine has decided not to waste a single crumb from his bakery and donated all of them to the homeless, vulnerable immigrants, or just to anyone who needs it and can’t afford to buy something to eat.

Every night when the bakery closed, Fedele would go to a bench not far from his shop and leave bags of bread, milk, oil, and other essentials. Everything was left on the bench to benefit those most in need, for free.

Fedele learned that kind attitude when he was a child, according to the Italian newspaper La Repubblica, when he went to work with his father. One day, a monk passed by, and when he was asked what he needed, he only asked for a piece of bread.

As the monk left the bakery, Fedele followed him and witnessed how he distributed pieces of bread to those who needed it most.

That great example never left his mind, and he knew that his life’s mission was to help the needy.

His mission is a little more than leaving food on the bench, he sometimes delivers them in a home, when the person is sick or unable to leave the house.

“There was never a shortage of food on my bench. Sometimes I take the food I collect to the homes of people in need. After all, that’s how it all started,” he said.

“When a few months ago, the mother of a sick little girl asked me to bring her leftover bread from the store because she didn’t have enough money to buy her food. I came to help, and since then, I started doing it every day. That has been my mission.”

He never needed recognition, though it was hard to not notice such a good deed. Up to this day, so many citizens have joined Fedele.