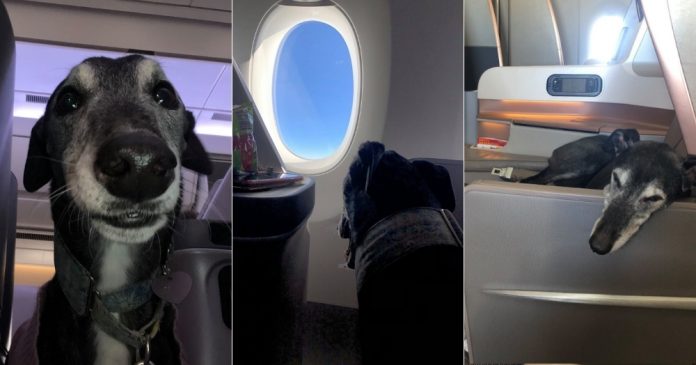 A good senior dog flying with class – business class. It was his greatest treat, especially when he was able to celebrate his birthday the posh way… flying business class onboard Singapore Airline (SIA), the world’s most awarded airline. What a lucky canine!

Recently, the lucky senior dog named Lewis, a male greyhound, got to experience the great life at a high altitude, en route from Sydney to Italy.

According to their Facebook post, Lewis is starting a new life with his new owner, who was relocating to Italy. The senior doggo was ready to embark on his new journey in a different country.

His owner saved up enough money to afford a first-class ticket with SIA.

However, Lewis was supposed to stay in the plane’s cargo or storage deck, separated temporarily from his owner, as per SIA’s travel policy.

Luckily, the plane’s flight that day was almost empty, and SIA allowed the senior dog to fly in the cabin, together with his human in the business class section. Greyt Grey Rescue has confirmed this.

In an interview with Mothership, a spokesperson for SIA said that Lewis is a support dog and was given the approval to fly on Business Class.

The SIA spokesperson added, that allowing Lewis to stay with his owner in Business Class would lessen the person’s stress while traveling during a global pandemic. Numerous steps are also being done by SIA to keep the journey of the customers “as safe and easy as possible”.

Flying in business class has already been a treat for Lewis. Good for him, he celebrated his birthday onboard, too. He was given a birthday treat made of 2 cupcakes with a “Happy Birthday” sign on top of them and a croissant.

The SIA staff onboard totally spoiled the birthday boy by adding more treats given to him, said Greyt Grey Rescue. “They also gave him strawberry yogurt.”

Greyt Greys Rescue added that Lewis also felt very comfortable during the entire flight that he “made himself at home.” He was a well-behaved dog, and his flight from Sydney to Italy went on very smoothly. He did not cry nor have any accidents.

The SIA staff said that they were impressed by the senior dog’s good behavior. Lewis was the best dog passenger they have encountered on the flight, including fully trained service dogs.