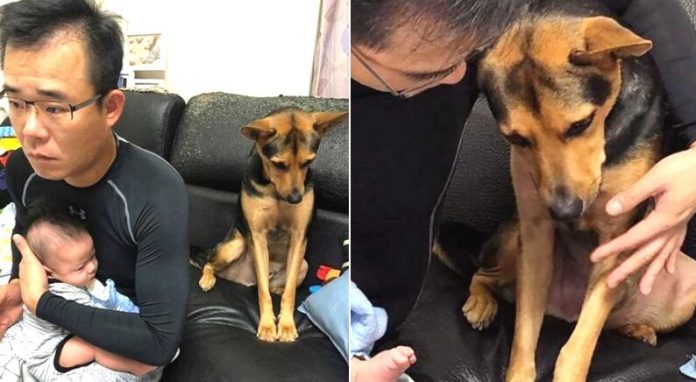 “I know how to love, too… ” Dogs, just like humans, are capable of feeling love and affection. When they feel ignored, they feel jealousy, too.

A puppy, who was sad about the owner who only held the baby in his arms, bowed his head and felt sad.

Recently, Taiwanese media ETtoday introduced the story of a dog who has become sullen because he wasn’t being paid attention to by his beloved owner.

According to reports, the dog’s owner held only the baby in his arms to feed him formula and pat him on the back.

The puppy sitting next to him seemed to think that the owner would only hug the baby and ignore him.

The puppy bowed his head down, with his paws together, and projected a sad face.

The guardian, who later realized that his dog was sad, turned around and comforted his dog, again and again, assuring him that he was not ignored.