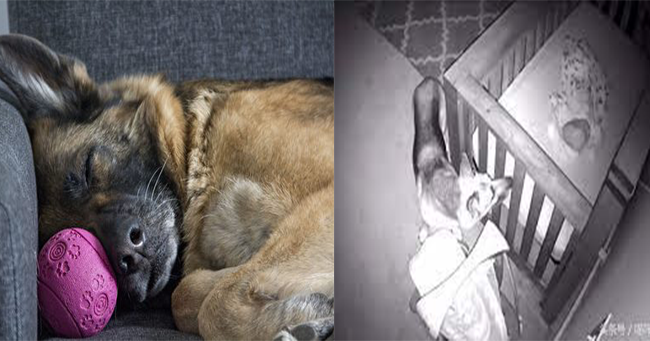 Dogs and babies can be the cutest best friends in the world! When there is a baby in the house, the dog is usually very happy, likes to be around the little human, and will not hesitate to approach and show concern to the child.

A video shared by a netizen recently shows a dog who faithfully looks after and patiently takes care of its owner’s baby, a heart-warming video that immediately went viral.

Two German shepherd dogs have been living with a couple for years. The owner’s last post before the wedding was a photo of their happiness together. Two years later, his wife gave birth to their first baby.

Three months ago, she posted 3 new videos, with the caption: “Monitor caught my baby’s bodyguard: Sophia is checking on my son at 2:00 AM, what a good girl!”

It turns out that there is a CCTV camera installed in the family’s nursery. It appears that Sophia, her 7-year-old German Shepherd dog goes to the nursery around 2:00 AM every day to carefully check if the little human is sleeping well.

The new dad said that the most touching part was that after inspecting the crib, Sophia would look out the window for a bit to make sure that everything in the vicinity and around her was safe, and then she would leave the room and choose to sleep in the hallway.

“When I was young, my mother also kept a German shepherd dog, and she did it for him.”

“My German Shepherd did the same thing. He goes around at night and then sleeps in the hallway.”

The fact remains that they are called A Man’s Best Friend.