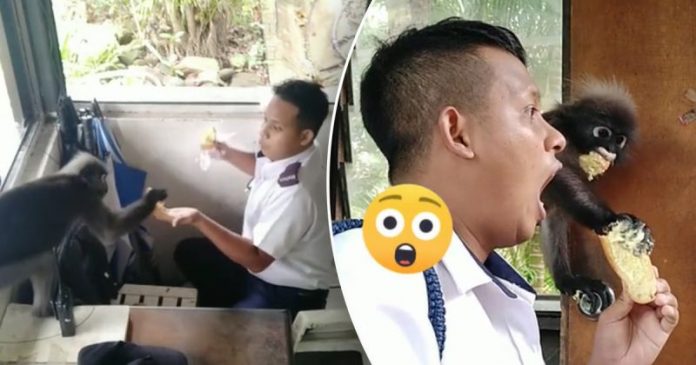 Surely, many would agree if it is said that monkeys are very clever and cunning animals. If you come across these animals with food in your hand, there is a good chance they will snatch it so fast you would not know where the food has gone.

Take a look at this photo. The monkey snatched the food from the security guard’s hand before he could even take a bite.

The experience was shared by a security guard, @hafiz96 who faced the incident while working. It was successfully recorded by CCTV cameras and uploaded on TikTok’s social media site.

While the security guard was eating at his post, a monkey appeared in the window and snatched a piece of bread from his hand. Not only that, but the monkey also wanted to take all the bread of Hafiz before he could take a bite. In the end, the young man had to hand over the rest of the bread in plastic.

Soon after, the monkey came back to steal Hafiz’s food again. Apparently, not only once or twice did he commit the theft but many times!

Perhaps many are wondering why Hafiz just let his food be taken by the same monkey over and over again. He should have been able to prevent the incident from happening.

It turned out that the monkey was Hafiz’s good friend named Lisa. Before this, Lisa used to come to Hafiz’s workplace, and eventually, they got to know each other.

Although Lisa often takes Hafiz’s food, the young man actually loves Lisa very much. He even often played with Lisa, fed her, and recorded their interactions.

Her video of ‘robbing’ Hafiz was uploaded on TikTok has been viewed more than 6.9 million times and since then she has become known and gained many followers on the social media site. Many praised Hafiz for his kindness.

Although Lisa often takes her food, Hafiz doesn’t care and loves Lisa very much. With Lisa’s presence, he is not so lonely at work.

Here is the hilarious video that has gone viral: