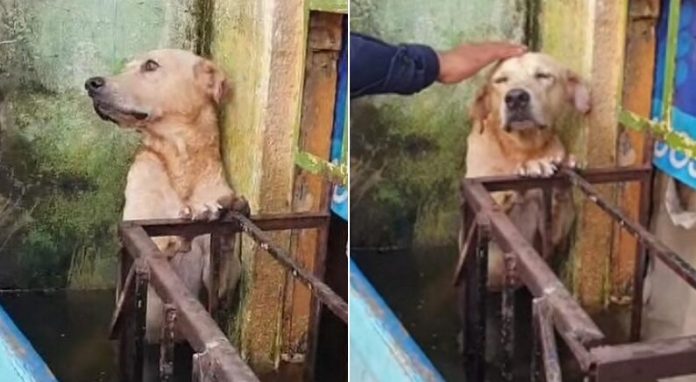 The region of Tabasco in Mexico hadn’t seen floods of this scale for over 50 years. In November 2020, Southern Mexico was hit by a tropical storm Gamma and Hurricane Eta, which both clashed with two cold fronts, creating a massive rainfall. Over 300,000 people have been affected by the rainfalls, with hundreds missing and dozens dead.

Days after the storm has passed, damaged properties scattered everywhere and the tragedy it brought were evident on survivors that were left heartbroken and stunned. The Mexican Marine Secretariat (SEMAR) were the first responders and embarking on a rescue mission, searching the flooded streets thoroughly for those who have survived and stranded. One of the few lucky ones was a golden Labrador retriever, who was rescued in time by SEMAR.

The dog was stuck close to the end of the building, desperately holding on to a railing with both his front legs. Half of his body was underwater and looked exhausted. The rescuers had no hint on how long he was waiting. The Marine rescuer patted the dog to assure him that he was safe.

He was too weak to climb on the boat by himself, apparently, he was pulled up by the rescuer.

He was carried on to the bigger boat.

The dog finally was on dry ground and have recovered from exhaustion.

Upon arriving at the SEMAR Headquarters, they did a thorough health check on the rescued Golden Retriever.

The rescue workers transferred him to a bigger boat and the dog was finally able to stand on all four legs on dry and firm ground. SEMAR took him in and have given him medical service. At that time, the dog was scared and scrawny, even the tough soldiers in the area expressed pity on the poor pup. No one has answered their call to take the dog, so the Marine Secretariat has decided to adopt him into their large Navy family, and in all fairness, maybe that’s for the best.

The Labrador got inducted into the large family of the Mexican Marine Secretariat.

SEMAR has not given him a name yet, so they held an open contest for everyone. Given the dog’s medical state and mood, one of the Navy officials admitted that they wanted to make him a rescue dog since he was once a rescued dog himself.

“The dog shows great potential and ability for that,” he said. “There’s a hope that he’ll be one of the best rescue dogs since it had the experience of being rescued itself. Goes to show that even in the heavy clouds there are a few rays of light and hope shining through.”

SEMAR hopes that one day the dog will become a rescue dog himself.

Recently, the dog’s new family photos have been released to the online community, attracting the attention of netizens around the world. “We’re so glad he was rescued, and it’s so good to see him have his happy ending,” the Navy officers said, “and we wish him happiness for the rest of his life.”

22-year-old Filipino teacher often gets mistaken as a school student due...