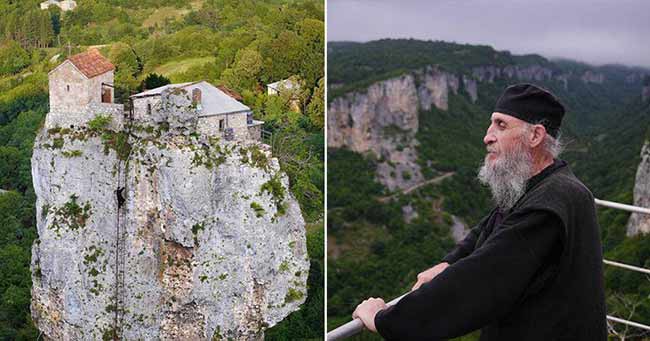 Along with economic development, the pressures of urban life are increasing. Some people choose to escape the hustle and bustle of the city and spend the rest of their lives in a quiet and peaceful place.

Although the mountains and forests are remote, it is a favorite place for hermits. Surrounded by beautiful mountains, forests, and rivers, and undisturbed, living in the quiet mountains and away from the congested city is the life everyone dreams of, which only quite a few people have done.

What if we told you that there is a 63-year-old man who actually did it? The man, who lives on a 40-meter-high stone pillar in Georgia, is cut off from the city and blessed with 360-degree views of lush green mountains.

But, he had a different reason for doing it. Maxime Qavtaradze did that because he was a monk who wanted to live closer to God, literally and otherwise.

Known as the Katskhi Pillar, the 40-meter high rock is a limestone monolith that stands tall in the bosom of the Caucasus Mountains. It was uninhabited from the 1400s until the monk came and started living there in 1993. Since then, Qavtaradze has been living alone for 28 years.

Qavtaradze’s solitary life is revealed when a photographer from New Zealand, named Amos Chapple, was allowed to capture the monk’s world on photos.

If you think that was easy, know that the photographer had to pass the litmus test by spending four days in intense prayer before he was allowed to climb up and do his job!

Each day involved seven hours of prayer for him, including four hours from 2 a.m. until sunrise (things people do for desire)!

Thanks to Chapple’s hard work and subsequent ascent to the top of the rock, we now know the story of this monk.

Before becoming the monk he is today, Maxime Qavtaradze used to work as a crane operator.

In 1993, he took his monastic vows and climbed to the top of this rock. The main reason for doing so, when he said, “Here in silence you can feel the presence of God.”

Giving little details about his life in the past, he revealed, “When I was younger, I drank, sold drugs, everything. When I ended up in prison, I knew it was time for a change. I used to drink with friends in the hills around here and looked up at this place, where the land meets the sky.”‎

Life was not easy for the monk when he first moved to the top of this pillar. Looking back at that time, he says, “For the first two years there was nothing here so I slept in an old refrigerator to protect myself from the weather.”

In the following years, his followers renovated the chapel that was already there and built a cottage for him to live in.

The monk survives on daily supplies delivered to him by his followers from the foot of the pillar.

Regarding the daily activities for Qavtaradze, he undergoes 20 minutes of descending the stairs attached to the pillar twice a week, only for his visits to the monastery at the foot of the rock for prayers.

The Katskhi Pillar and the chapel above have been a point of mystery to the locals in the neighborhood over the years.

It wasn’t until 1944 that a team of climbers measured the height of this pillar and found the skeleton of a Stylite monk who appeared to have died within the walls of the chapel years ago during his days of solitude.

Qavtaradze is also a Stylite monk, who is also known as a pillar saint, known to live a solitary life on top of a pillar, cut off from the outside world.

As far as the Katskhi Pillar is concerned, it was used by the Stylites until the 15th century before the practice was discontinued following the Ottoman invasion of Georgia.