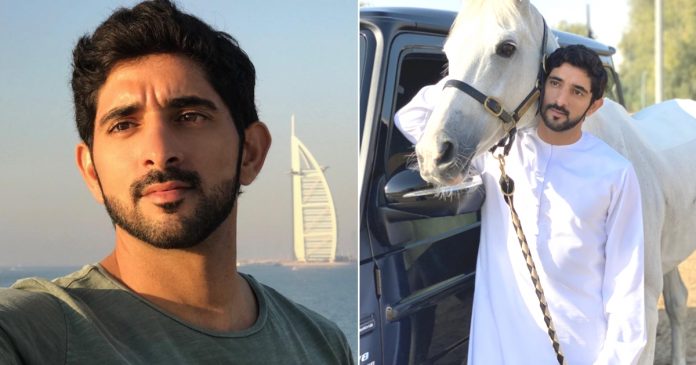 Speaking of handsome royal princes, many people think of Prince William or Prince Harry of England! But, in addition to the two brothers, Hamdan, the Prince of Dubai in the Middle East, has also gained a lot of admirers in recent years because of his strong net worth and his sexy appearance!

At the age of 38 this year, he not only has profound and charming facial features but also has a solid body that is hard to ignore. Compared with other people, he always has a sense of outstanding and self-lightening, so many netizens call him outright. “The Walking Hormone!”

In the past, Prince Hamdan of Dubai, who often posted photos of his precious car G63 AMG on his Instagram account and his handsome photos of various sports, accumulated a lot of fans on the internet. His bronze muscular body, plus his professional and heroic stature, fascinated fans around the world. He was even hailed as the “world’s sexiest royal member” by the Forbes rich list, which shows how attractive and charming he is, inside and out.

This man called the most handsome prince in the world, Hamdan, after having been a huge topic among the people, even jumped to the news page because of a heart-warming event! Hamdan likes to bask in cars, but recently, his favorite car, the G63 AMG was chosen as a good place for nesting by a family of turtledoves. They have positioned themselves on the hood of his car near the windshield, complete with a nest. The prince could not help but take a video of the unknowing birds.

In August last year, Hamdan posted a video of the birds on his IG account, which mentioned that the front of his beloved G63 AMG, was infiltrated by turtle doves that built a bird’s nest! Not only that, the birds may feel that it is very safe here, so they started to hatch the eggs after the nest is built. This behavior surprised the prince. However, when most people encounter such a scene, they may immediately remove the bird’s nest. Prince Hamdan, however, did something different. He temporarily “blocked off” the area around the car, so that the turtle doves can live with some peace of mind.

Isn’t it heartwarming to see such a sight? After the birds built their nests, Hamdan shared a video of about 80 seconds on his IG. Not only did he see a bird hatch in the nest, but the mother bird also fed her offspring lovingly. It was so touching to see! And the prince wrote in the title, “Sometimes the little things in life can be satisfying.” Such domineering and friendly animals immediately garnered praises on the internet. Very heartwarming!

Hamdan has always been a person who loves animals. It’s not difficult to search his IG to see photos of marine and terrestrial creatures, and the photo of him standing with a white horse is also fascinating, fans joked that he is a modern version of Prince Charming. Indeed!

Even all kinds of rare birds, lions, and eagles have photos with Prince Hamdan. As an “animal fan,” he has raised some, from small to huge animals. He also pays attention to other exotic animals while visiting the world. So, it is not surprising that he is kind to the nesting birds.

It is also worth mentioning that Prince Hamdan has previously supported wildlife conservation! He may be rich, but still retains the concept of co-existence with nature. No wonder this “world’s most handsome prince” is loved both inside and out. I believe this kind of man is the dream of many young women!!! ❤️

Prince Hamdan is too good to be true! A member of a royal family with a heart for wildlife conservation.