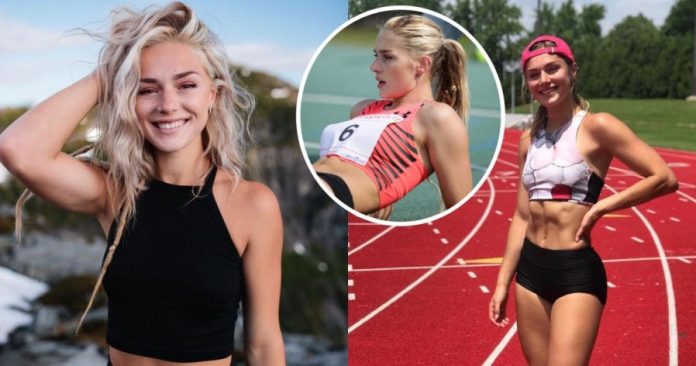 The Tokyo Olympics, which was postponed due to the epidemic, was finally officially opened on the 23rd of July, 2021. In addition to the exciting games that are expected, the high-value athletes on the field are also the focus of everyone’s discussion! Among them, Georgia Ellenwood, a 25-year-old track and field athlete from Canada, put on a jersey for the national team and competed for the “heptathlon.”

According to comprehensive foreign media reports, Georgia Ellenwood, as a track and field athlete, won the gold medal with a total of 6314 points in the Olympic trials in Germany last month, and successfully won the first Olympic qualification entry in her life; she will represent Canada in the women’s competition. Heptathlon, competition events include 100-meter hurdle, 200-meter sprint, high jump, long jump, shot throw, javelin throw, and 800-meter race.

In addition to having a very high profile, plus a devilish figure, which is completely comparable to the quality of supermodels, she also often basks her abdominal muscles on Instagram, attracting more than 420,000 fans to follow.

Georgia, who focuses on the “heptathlon”, began to participate in the middle school track and field school team and started training at the age of 13. She also represented American universities in the 2018 National College Athletic Association (NCAA) heptathlon competition, and this event has extremely high requirements for players, not only long jump, high jump shot put, javelin throw, but also 100-meter hurdles, 200-meter sprint, and the 800-meter race. In the end, she won the “all-around champion”.

In addition to these, she has participated in 100-meter sprints, 1600-meter relays, 60-meter hurdles, etc., and is proficient in many track and field events.

Throughout last year, due to the pandemic situation, Georgia had to force a change in exercise methods. However, she did not relax at all. Except for high jump and long jump training, Georgia would jog into the forest and stay away from the crowd.

Additionally, she pays special attention to the core training of the abdomen. She definitely takes two minutes every day to perform the following actions on the bed or yoga mat.

She once said: “If you do two-minute training three times a week, you will definitely become stronger.”

This year, she challenged herself with 30-day sit-ups.

Whale shark gets stuck in yellow rope asks for help from...