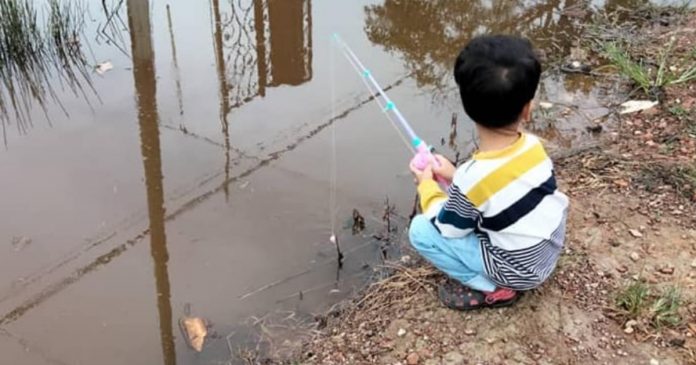 Surprises can come anytime and from anywhere. When you least expect them, they can come as something awesome. Never judge at the simplest of things; they may surprise you the most. A little boy in this story got more than what he bargained for. A simple toy he owned gave him the biggest gift.

A boy was playing with his toy fishing rod when unexpectedly, he was successful in catching a big fish with it. His father was surprised!

On Sunday, the 11th of October, 2020, a man brought his son fishing at his request and brought several live frogs to use as bait while he fishes at a nearby ditch.

According to the photos, the only fishing rod the boy used was a small toy made only for kids’ play.

The little boy played fishing with his toy rod for about 10 minutes, when suddenly something pulled at the other end of the plastic hook. The boy caught a big fish! The father was very much surprised! He originally only wanted to grant his son’s wish to go fishing but never thought that the boy would catch a live fish.

Faizal shared the experience on Facebook and received a very enthusiastic response from netizens:

“Your son made it look like fishing is very easy!”

“How can your son’s toy fishing rod become so lucky?”

Great job, little boy! Netizens can just imagine what bigger fish you can catch when you finally have your first real fishing rod when you grow up.