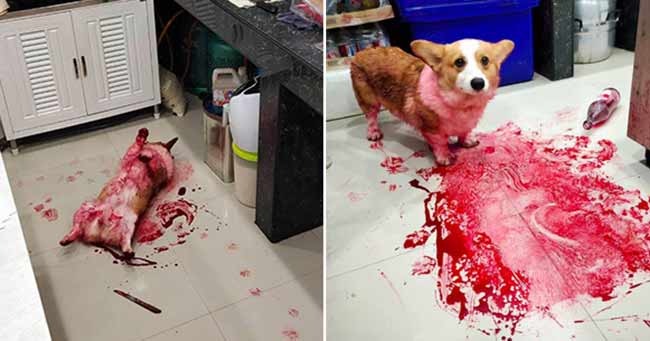 As animal lovers, more often than not, we forgive our pets when they do mischievous things and mistakes when they are in a good mood. No matter how they obey our orders, they tend to mess up some things that are unacceptable to us. Like this story about a corgi dog in Thailand who almost gave a fright to its owner when they could not find him anywhere, then found him “bloody” on the kitchen floor.

The owner of BlaBla-boo – Premium Dog Cafe in Ayutthaya, Thailand suffered a shock of their lives when their Corgi, Cartier, disappeared and was later found lying on the kitchen floor covered in ‘blood’!

On January 18, they shared a post on Facebook saying they had freed Cartier outside to enjoy his daily activities. The dog would usually return to his room, but this time they could not find him anywhere.

After checking the whole house, they finally found him in the kitchen and got the shock of their lives! They were horrified to see Cartier covered in blood! Cartier was lying motionless on the floor with blood all over his body and next to him was a ‘bloody’ knife!

They finally relaxed when they realized that Cartier dropped the red syrup and rolled in it, and the kitchen knife was on the floor all along, also tainted with the red syrup.

Although it must have been a nightmare for the owner to see such an unusual sight and remembering it while cleaning the kitchen, most netizens would say the incident was rather cute, adorable, and hilarious.