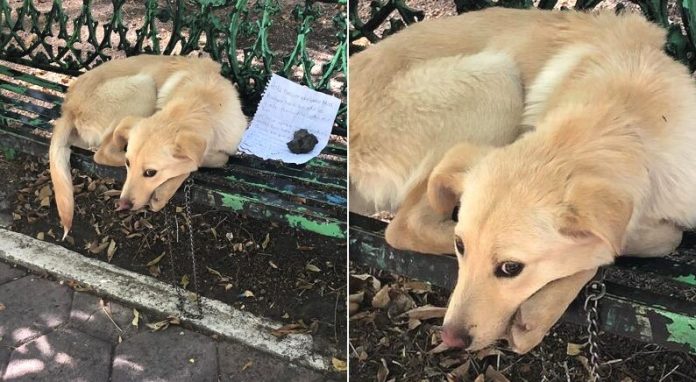 It hurts to see a beloved pet get adopted by another family, though it hurts, even more, to see them being abused by people you live with. On the other hand, it will be best for them to be living with a family who will love them more and make them a part of their own.

This is a story of a puppy who was tied and left abandoned in a park by a child who could not take any more abuses done to the animal. The dog was left behind, hoping there would be rescuers who could find it a loving home.

Due to the traumatizing incidents that the dog has undergone with its former owners, its instinct was to growl at passers-by in the park. There was a note placed beside the puppy, who was just less than a year old.

In November 2020, an animal rescue organization in Mexico rescued an abandoned puppy named “Max,” who was tied to a bench.

At the time of his rescue, Max was terrified and trembling.

Nearby residents tried to bring him water and food, but they were terrified of Max and couldn’t get close because he growled and barked.

An animal rescue organization that received news about Max arrived at the site.

Professional trainers calmly soothe Max, then rescued him, and found a note next to him. It was a note written in the handwriting of a child.

“Hi. His name is Max. Please adopt him. Please adopt this cute puppy and take good care of him. My family is abusing Max. It hurts to leave him here, but it hurts me more to see Max being abused.”

Later that day, Max was moved to a shelter and has visibly calmed down.

He didn’t avoid the gentle strokes of people. He began to change, gradually forgetting the pain of his past.

The rescue group also pointed out that “Max is very friendly and kind,” and “he likes to play with the ball.”

Max, who was sitting alone on a park bench, terrified, is now waiting for his new family.

The rescue group is accepting applications for his adoption.

Here is a video of how Max was rescued: