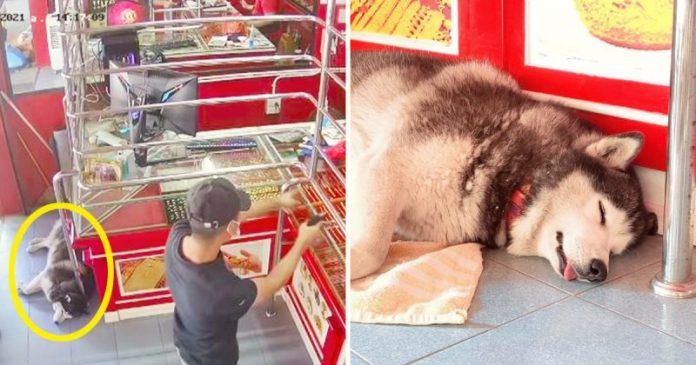 Most people admit that their pet dogs are more than just part of the family. They can also be the “guardians” of their homes. Some of them adopt the fiercest breed of dog that will follow all their commands. This way, they feel safer wherever they go.

This is the story of a Siberian Husky in Thailand named Lucky.

Lucky stole the attention of a citizen present at the shop, having been found asleep during a ‘robbery’ incident.

According to reports, a jewelry shop in Thailand performed a safety test and it was recorded through CCTV footage.

During the 32-minute video, it was clear that the robbers were approaching the counter, pointing a gun at the person behind the jewelry display.

The actors, pretending they were robbers, looked like they were threatening the owner of the premises to give them a bag, supposedly, filled with cash.

And the dog, Lucky? See for yourself…

According to the owner of the shop, Worawut Lomwanawong, Lucky is actually quite active and obedient to his commands.

At that point, the owner noticed that he was unable to train his dog on watching out for robbers. He assumed that the dog kept on sleeping since Lucky knows that the actor was actually a policeman in civilian clothing, and the incident was only a safety test.

The policeman consistently comes to the premises for inspection and Lucky knows him personally. Hence, he did not attack the robber due to recognition.

Or was it just that sleeping was Lucky’s hobby?

“I think Lucky understands human language. He is usually active and sensitive if I make noise or tell him to do something,” the owner said.

Lucky was previously a stray dog suffering from lice-carrying diseases and laminated granuloma. He was found outside a convenience store and was adopted by his current owner seven years ago until the dog finally recovered.

Watch the hilarious short video below: