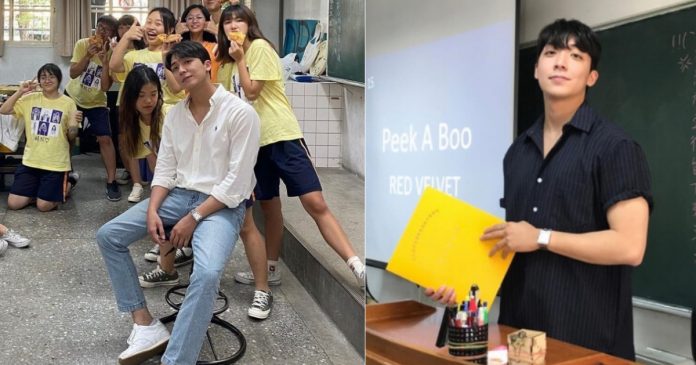 I believe that many female students can’t help but daydream of Zhou Gong when they are in class, but if the teacher standing on the podium today is a handsome guy or a beautiful woman, everyone will be very attentive in class, right? Recently, there is a teacher who teaches in a school in Taichung. Due to his handsome looks, he was heatedly discussed by netizens. Many people saw him standing on the podium and shouted: “I really want to be his student!”

A few days ago, there is a professor who teaches Korean on the internet. He is currently teaching at Lingdong University of Science and Technology in Taichung. In addition to his tall figure, he also has the exquisite face of a Korean celebrity. At first, I thought he was a handsome schoolmaster.

When he majored in teaching Korean, he looked very good when he picked up the microphone, but many people have noticed the muscled arms of this teacher, and the chest muscles and biceps when wearing a white t-shirt. Presumably, most of the students just keep staring at this handsome teacher while he lectures.

So this handsome Korean teacher can be said to have fascinated many girls! And he, whose real name is Kim Byung-soo and from South Korea, is turning 30-years-old this year. He has set off a whirlwind in the classroom and on the internet. He is said to be an Internet celebrity on IG! So far, not only has he accumulated 53,000 followers but also when you browse his social website photos, you can also see the resemblance of a Korean boy band. The images on IG and in real life are very good.

Kim Byung-soo, who is originally from South Korea has lived in Taiwan for many years. He has studied and taught in the “Chinese Language Teaching Department” and can speak the language fluently. He has also appeared as a guest on the program “One in Two” many times before. Kim Byung-soo, who spoke fluent Chinese with the proper accent in the show, became more popular after the TV broadcast!

At present, besides teaching at two schools in the central part of the country, Kim Byung-soo is not hesitant to post photos of his personal life and sports activities on IG. Looking at his handsome face and strong muscles, this is completely the basic look of Korean men. 😆

Additionally, he also opened his channel on YouTube. With the channel name “Kim Byung-soo’s Day”, he posted various VLOGs of his life. He can only say that he appreciates his body care maintenance and speak Korean fluently, and likes being friends with Korean people. In his busy life, such a handsome guy really needs a boost!

Apparently, after Kim Byung-soo’s teaching photos went viral, many netizens were so fascinated that they left comments such as: “I want to be his student too!”

“I don’t doze off with such a handsome teacher!”

“His class is an enjoyment!”

This handsome teacher is really stunning! I’ll bet many girls want to be his student when they finally see him in person!