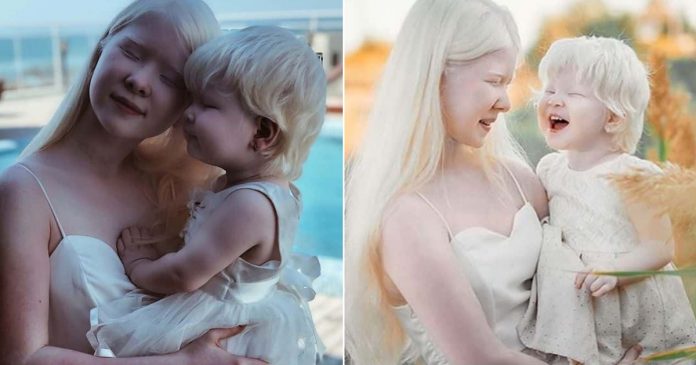 Albinism is a group of inherited disorders that results in little or no production of the pigment melanin, which determines the color of the skin, hair, and eyes, so all forms of albinism cause problems with the development and function of the eyes. (Genetic and Rare Diseases Information Center)

“When God closes a door, somewhere he opens a window.” 14-year-old Asel and 2-year-old Kamila are a pair of sisters from Kazakhstan. They were born with “albinism” and they have received all kinds of mocking and insulting looks since they were young. Her mother Aimen Sarkitova was also surprised when the sisters were born. She didn’t understand what was going on when everything seemed to be normal.

▼Aimen Sarkitova said: “People are surprised at the sisters who were born pure white. Many people don’t understand why. Doctors also think that the children’s father is Russian.”

Asel (left, top row) has an 8-year-old brother with dark skin and everything is normal. The younger brother is also very curious as, why his older sister is different from them. It was later learned that they had ancestors who carried the Albinism gene.

▼Asel, who is born an “albino”, is no different from other children. Only her hair, eyes, and skin color are white, and she can’t be exposed to too much sun. At first, Asel was often teased by people around her, she didn’t know how to deal with the situation on her own.

▼At one point, an advertiser invited Asel to shoot for an advertisement, which started her brilliant life from then on. Today, Asel is already a popular model, and she takes her younger sister for a photoshoot together.

As a model, Asel became generous and confident. She bravely faced the camera to show her unique side. Today, she has nearly 70,000 followers on Instagram, and more and more people are attracted by the “pure white” sisters. Asel’s younger brother is also proud to introduce them to others, his sister and younger sister are different. Face life with a smile and gain more happiness.

“When you feel insecure or like you don’t measure up, remind yourself of how far you’ve come. And at that moment, you’ll realize you’ve climbed mountains and can overcome anything.” ― Brittany Burgunder

In an uncommon marriage, twin girls marry twin boys and the...