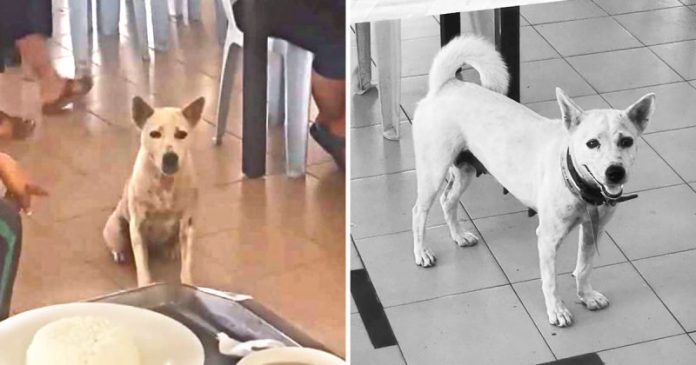 Dog lovers received the saddest news when a dog named Xiao Bai who was once a sensation on social media in 2019, was reported dead. Xiao Bai caught the attention of netizens that year after getting food packages at a chicken rice stall in Miri, Sarawak.

The news of his death was shared by the owner of the shop, Alex Sim on his Facebook page on May 17.

“Bai, people are really bad, which saddens me. Rest in peace …” he wrote in the caption along with the photo of the dog.

It is understood that Xiao Bai died after Miri City Council (MBM) officials found him on the street and shot him a sedative.

Alex did not reveal the cause of the dog’s death, however, a woman claiming herself as the owner of Xiao Bai did share the news.

According to her, on the morning of May 17, Xiao Bai was still wandering outside the house as usual despite being called in by the woman.

“At that time, I saw some people who looked like Council staff. When I realized that they were going to shoot stray dogs, I immediately looked for Xiao Bai.”

Unfortunately, she did not manage to find the dog. About 11:00 a.m., she later received a text message from a neighbor saying that her dog had been shot in a nearby area.

After finding out about the news, the woman went to the MBM office to seek clarification. “I asked the officer there, what happened?”

They replied that they were just shooting sedatives and Xiao Bai would be available within two hours.

However, after 2:00 p.m., Xiao Bai is still unconscious. Two hours later, Xiao Bai’s body became stiff and at that moment, the woman realized that her dog was gone.

Feeling dissatisfied, the woman once again contacted the MBM. They said Xiao Bai’s resistance to the sedative was quite weak, causing the unfortunate dog to die.

Later, the woman admitted that she had received a warning notice about an operation involving wild animals in the area, a week earlier.

Meanwhile, on Facebook, Alex refused to point fingers at his post for the result of this incident.

He also apologized for not responding to any questions from concerned netizens. “I’m very sad at this time so I can not reply to your messages. I apologize.”