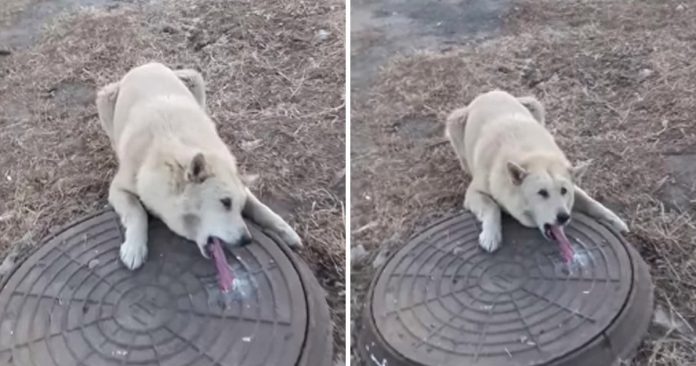 There are times when the weather is very unpredictable, and the temperatures can be extreme. Some people can easily adjust to the change of weather conditions when others have quite a difficult time getting used to climate changes. Due to these extreme weather conditions, tangible things outdoors can be either sticky or slippery.

Just like this incident that happened to a poor puppy while he was strolling down the streets in Vladivostok, in Russia, while the temperature outdoors was below zero degrees. The poor little fellow was quite curious about the ice that covered the lid of a manhole cover.

Out of curiosity, he licked the frozen iron surface of the cover and his tongue suddenly got stuck.

On January 25, 2018, the incident was caught on video, which has circulated on social media. The video shows a person who was passing by and witnessed the poor puppy with his tongue stuck on the lid of a manhole cover.

The temperature in far east Russia that day was around 15° below zero. It was inevitable that the whole environment would be covered in ice, however, something caught the attention of this furry fellow, and wanted to try it with his tongue.

Luckily, a man with a heart for dogs in distress happens to be passing by and he undoubtedly became the hero of this fur baby. The man poured water at the dog’s part of the tongue that was stuck on the lid and tried to free it.

The images show how the dog was struggling to free his tongue from the lid, but to no success. He pulled hard and twisted his tongue to try and break it free but to no avail, it was stuck on the lid.

The expression of frustration and the feeling of pain on the dog’s face was evident in the video while he kept on struggling to free his tongue.

The dog felt quite a relief when the man stopped by and helped him with his predicament.

As the generous stranger poured all the water from a bottle onto his tongue, he tried to calm the dog, who was in a desperate situation.

Though the water from the 1st bottle was not able to release the dog’s tongue, the man asked for help from other passers-by who quickly went to get more water to free the dog. As soon as warm water was poured onto the dog’s tongue, he was free at last in a matter of seconds.

The incident seems similar to a scene in the 1994 movie, Dumb and Dumber, starring Jeff Daniels and Jim Carrey, wherein Harry Dunne’s, played by Daniels, the tongue gets frozen stuck to the ski-lift lead pipe.

Although the video did not show how the dog’s tongue was released, it became known that his tail kept on wagging as a sign of gratitude, and was very happy to be finally out of the ordeal he was in.

The puppy still hovered, sniffing the ground and figuring out what caught his tongue on the lid.

The man who saved the dog comforted him and made sure his tongue had no wounds. Stroking his chin to make him show his tongue again to confirm that the dog was okay and in perfect condition.

This incident may come as an alert to pet owners, too, who allow their fur babies to go for a stroll in such low-temperature climates. It also warns us to keep an eye out for any stray animals in need of saving.