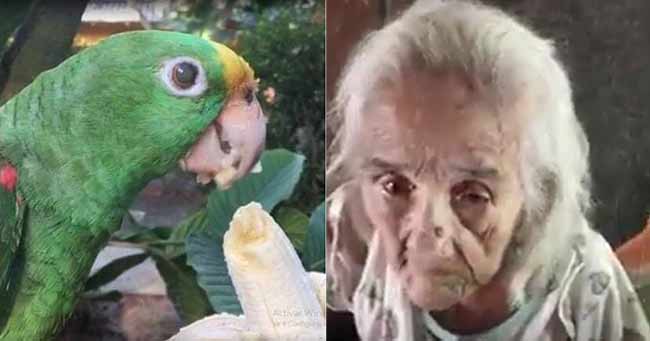 The bond that develops between us and our pets grows stronger over time, making it very difficult for us to separate from them. To some pet lovers, separation anxiety happens when they leave us or pass away.

This is the story of 102-year-old Minerva Castellano, a grandmother in Córdoba, Colombia, who begged for help to retrieve her pet seized by the police, a parrot named Vitricio who had been with her for five decades.

The parrot has given her the best memories of her late husband, it was a yellow-headed parrot that belongs to the late Miguel del Toro, Minerva’s husband, who died more than 10 years ago.

Since the parrot arrived at Minerva’s house in 1970, he has been her best friend, having witnessed the birth of dozens of children and nearly fifty grandchildren and great-grandchildren of Minerva.

The police decided to confiscate Vitricio, and now that the parrot is in the hands of the police, this left Minerva with a broken heart.

Eliana Guerrero, Minerva’s granddaughter, told local media that the parrot had a problem on one of its wings, so she took it to Montería City for medical treatment.

“On November 2, the day Vitricio was taken from us, I arrived at the Terminal in Monteria and was immediately approached by the Police. They told me that they would take the parrot from me because it was a protected bird. I explained to them that this parrot has been with my family for 50 years, but they didn’t care,” she said.

Although Minerva was unable to take care of the parrot due to her age and her grandson was the one who looked after her, she suffered greatly from its absence.

Minerva’s granddaughter said that her grandmother asked her all the time if the bird has come back yet and said that “her bird hasn’t visited her yet.”

In a video the family posted on social media, Minerva is seen calling Vitricio to offer him a banana, when she sees that her parrot is not enjoying the food he likes so much, he is in a sad mood.

Eliana said that for her grandmother’s sake, they chose not to tell her that the parrot was in the hands of the police.

“The parrot likes me so much and he doesn’t eat unless we’re together, so I’m afraid he’s going to die. We also don’t want to tell grandma, because she can get sick,” Eliana said.

The family said that they were aware of the importance of preserving the species, though, Eliana said that they knew that animals from the wild should not be in the house, but explained that Vitricio was never locked up.

“Vitricio was always free,” she said, and that the parrot was always in the yard.

Eliana said that Vitricio has been a part of her family since before the laws were implemented from keeping these types of animals at home. All they want is to make the police aware of their grandmother’s situation.

Although some say that no one should have a parrot from the wild in their home, Vitricio remains free to move indoors and for a long time, he was accustomed to receiving love and protection from all the family members.