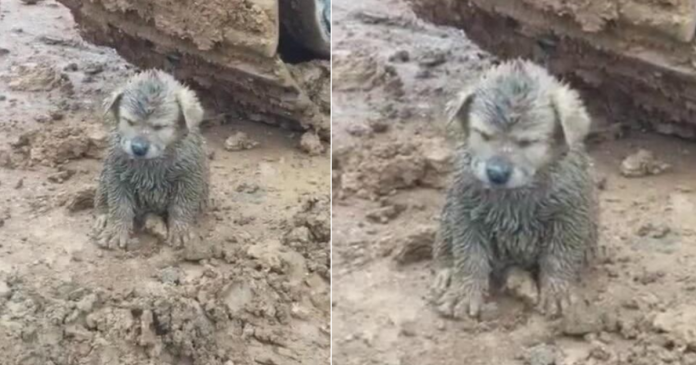 Some stray dogs are aloof from people, because of fear of being hurt and so they can protect themselves. But most stray dogs love to be in contact with other people, increasing their chances of being adopted.

A puppy covered in mud was seen sitting in the middle of the road on a construction site. Whether it did or did not see the excavator truck approaching, the puppy just sat still, blocking its way. It also did not show any signs of being frightened of the giant vehicle.

The excavator truck driver started scolding the puppy, which he found not cute at all and just sitting in the middle of the road not intending to move away. The dog looked hungry and feeling cold, but there were no restaurants nearby.

“This is a construction site, not a place to find food. This is no place for a dog, you cannot stay here!” the driver scolded.

The driver decided to keep the dog for a few days, assuming the owner was not nearby. At first, he thought it was a black dog. When he got home and bathed it, he was surprised to find that it was a Golden Retriever puppy! It was colored light brown with beautiful fur. The driver’s friends said that he was lucky it crossed his path, a very lucky treasure. Regardless of what bread the puppy was, the driver’s older brother loved the dog and decided to keep it for himself.

After a few days, the driver’s older brother decided to adopt the playful dog. With round eyes like marbles and beautiful shiny fur, the puppy has found a new home with the driver’s brother. Both are happy and the man thought that it was fate that he now has a new furry companion at home.