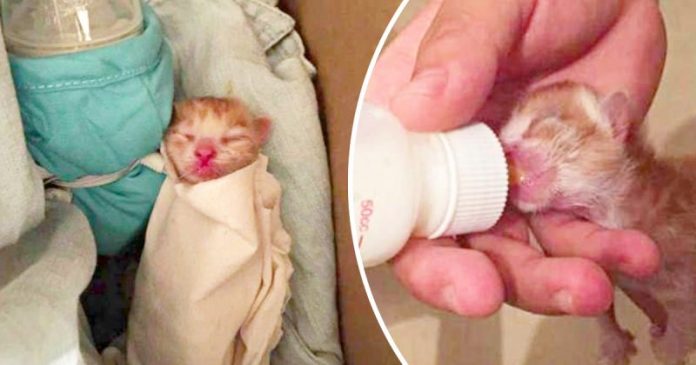 Have you heard a story about an ugly duckling? A baby duck was not allowed to mingle with its brothers and sisters because of its ugly looks. However, when the duck grew up he turned into a beautiful swan and was loved by his siblings and other animals.

This is similar to the story, The Ugly Duckling. Recently, a male college student found a small newborn kitten.

The poor kitten was found in a prairie area without the mother on its side. The kitten looks like a newborn baby and hasn’t opened its eyes yet. It was lucky to be found alive.

Sympathizing with the condition of the kitten, the student decided to sneak him in his room quietly as pets were not allowed inside their dorm.

The student showed the poor kitten to another three of his roommates. Upon looking at the condition of the kitten, all four of them were willing to take turns taking care of the poor kitten the best they could.

They wrapped the body of the kitten with a warm towel and took turns all night long feeding and taking care of it, making sure that it was consistently well-fed.

They all took the initiative to get milk and bottles of different sizes to allow the kitten to suckle comfortably. Amazingly, the kitten consumes all the milk it was given.

After a few days, the kitten started to look better and became more energetic than before, and has opened its eyes to see the world for the first time.

Thanks to the sacrifice and perseverance of the four roommates who took care of the kitten, it grew up and became a very beautiful cat! It was healthy and full of life that people did not believe that it was a rescued kitten that almost died some time ago.