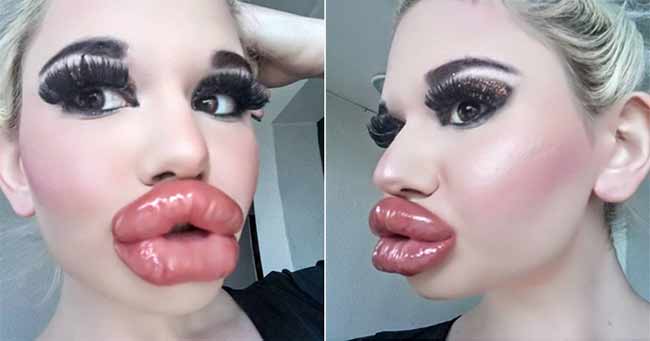 Andrea Emilova Ivanova, a 22-year-old woman from Sofia, Bulgaria, has doubled the size of her lips after undergoing her 20th filler injection.

The young woman, dubbed as the “real-life Barbie,” has spent millions of dollars to fill her lips, but claims she still wants to increase the size of her thick lips. She’s not sure if her lips are already the biggest in the world, but she admits that it’s definitely her biggest, so far.

Although she sometimes gets negative comments on social media because her lips are too big, Andrea says she ignores the criticism, because they are only opinions and that doesn’t matter to her. And now, she aims for bigger lips in the upcoming days.

“There are people who like me with big lips and there are people who like me with smaller lips but it doesn’t matter to me, because what’s important to me is how much I like them. The opinions of others are irrelevant,” Ivanova said. “I can’t give an indication of how big, or too big, because for everyone, ‘big’ and ‘too big’ are different concepts. I am broad-minded and I think people should be free to choose, which one for them is big, bigger or too big. There’s no limit to me.”

Ivanova, who reportedly got 15 lip filler injections last year alone, got “all kinds of lip fillers” in a bid to make herself look “fashionable,” last month on her 22nd birthday.

She claims that she wants to have another lip filler soon, but her doctor advised her to do another procedure after two months.

The girl’s transformation began in 2018, and after spending more money than she can remember to increase the size of her lips, Andrea Ivanova looks unrecognizable now. However, after doubling the size of her lips, the 22-year-old declared herself happy with her appearance, adding that she would love to have the biggest lips in the world.

“Yes, why not? In my country, big lips are fashionable and there are a lot of girls who are happy and content as well,” Ivanova said.

Andrea Emilova Ivanova currently has more than 33,000 followers on Instagram and claims to receive praise from her fans every day. She also appeared on article clippings showing the size of her lips and searches for other photos of big lips that she could find online.

Vanity is a vice. Sometimes, people take too much of it for granted. Having a beautiful physical outlook may be a gift, but having a good character should be one’s goal. Since cosmetic surgery is around, body enhancements have been the trend for some youngsters to improve their looks. A little change, necessary or otherwise, may be okay. Unnecessary body enhancements can turn into vices and can lead to mockery. At present, some youngsters ignore the ridiculousness and make it a trend to undergo multiple cosmetic surgeries.