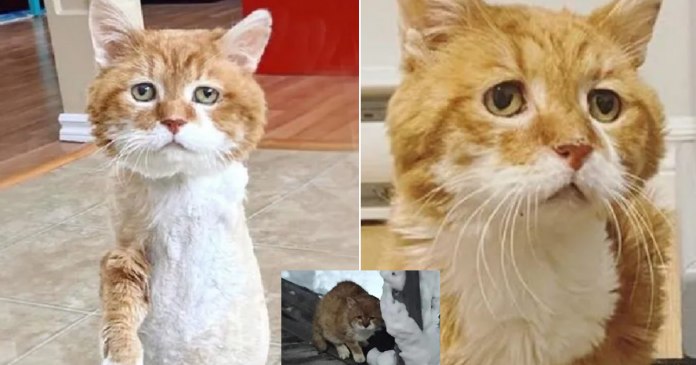 Most people are accustomed to seeing cats as friendly pets, though in reality, there are more stray cats with no home. They are the ones with no owners, more exposed to the outside world, and roaming the streets to no end. Luckily, there are many people with good hearts for animals and who are willing to rescue and adopt them, which these animals appreciate in return.

In 2012, A beautiful orange-colored three-legged cat named Bubby, was roaming the streets of Grand Falls-Windsor in Canada. He suddenly found himself in the kitchen of a home owned by Boyd Abbott and decided to stay. Mr. Abbott immediately bonded with the cat. Since then, Bubby would show up every day at the same place, and they were inseparable since.

The stray cat was missing its left front leg and a part of its tail. This did not bother his human friend, whose love and affection he instantly won over. From that day on, he would enter his home through the kitchen and made Boyd’s home like his own. Another cat in the house named Season became Bubby’s best friend.

Although Bubby did not like the indoors too much, he would frequently approach his best friend’s quarters and they would have wonderful adventures outdoors. Suddenly, Season has passed away.

Bubby continued to visit Mr. Abbott’s house regularly, and everyone in the family showed him love and took good care of him. One unfortunate day, Boyd Abbott passed away. His one wish was that the family continue to look after Bubby. Although they did their best, it did not work out, and Bubby disappeared. He was never heard of since.

In 2019, after many years have passed, Ray Pinset, a man who lived in Boyd Abbott’s neighborhood, recognized Bubby when the cat was seen roaming the streets nearby. He remembered the special bond the cat has shared with his human friend and his family years ago. Though Bubby have already looked older and weaker after spending years back on the streets.

He became more aggressive, though he needed urgent medical attention. One day, Ray tried to find him and wanted to take him home, but after several tries, the cat still evaded him.

When the harsh Canadian winter came, Ray got worried Bubby would not make it through the weather. He decided to visit the old Abbott’s home, which now had a new owner, and asked if they knew about the cat who used to stay with the former owners of the house.

The new owner was familiar with Bubby and saw him from time to time but paid no attention to him. Ray asked the owner to give him a call once Bubby shows up again on her doorstep.

The next day, the owner of the house called up Ray and said that the cat is sitting in her kitchen. Ray went to pick up the cat and rushed him to Exploits Valley SPCA Adoptables, an animal shelter.

“I wasn’t sure if Bubby would make it, but the least I could do was give him a chance.” Ray said.

“Bubby was dehydrated, beat up and all. He was sent to the vet and would not have survived another storm. The vet said he starting purring while on the exam table,” Sarah MacLeod, volunteer of Exploits Valley SPCA Adoptables, shared with Love Meow.

While Bubby continued to heal when he was still at the shelter, Boyd Abbott’s daughter came across a post on social media and asked for more information about Bubby.

“She came forward and told me Bubby’s story. She cried when she saw him and brought him his favorite dishes,” Sarah said.

Fortunately, the orange-colored three-legged cat named Bubby is in stable health and now eats from the dishes he once ate with a family he loved so much. He has a place now he can call his home. Thanks to the beautiful bond with the human he will never forget.

Here are some of the comments netizens posted about this heart-warming story:

If you have come across and rescued a stray animal, share your story. The community must recognize the benefits of the presence of stray cats and dogs in our lives.

Hilariously adorable moment when cat crashes the runway and steals the...