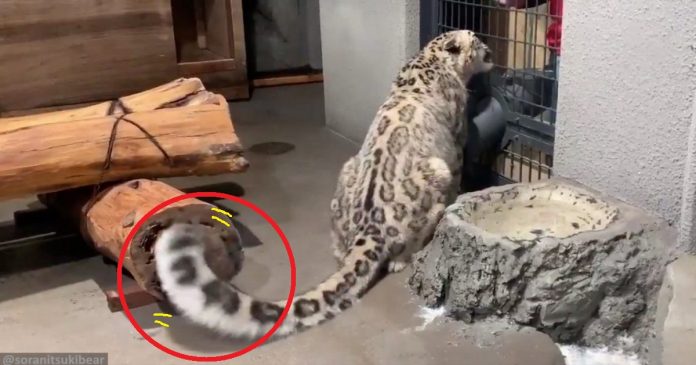 Snow leopards are such lovely animals. They are considered the tamest cat in the wild. Recently a Japanese man, @soranitsukibear on Twitter, visited the Yuanshan Zoo in Sapporo City and saw the snow leopard Shijimu eating. He is very fond of animals and often visits different zoos. He hurriedly took out his phone and captured a video of the enchanting animal having its meal.

The caretaker has just fed its meal to the leopard and quickly said goodbye after. The visitor took the video from behind the animal and could not see the leopard’s expression but had a lovely view of its long beautiful fluffy tail that shook when the caretaker said goodbye.

The Twitter user posted the video on his social media account, and the netizens thought it may or may not be real.

Everyone who watched the video was attracted to Shijimu’s flexible and fluffy tail, and different opinions were posted on the comments section: “There must be some mechanical machine operating that tail.” and “It’s too long like a skipping rope or a rattlesnake. I wish I could touch it!”

Apparently, there are only simple explanations as to why these wild cats bite their long tails. Some people think that since they are accustomed to the cold climate and are perched in high mountains, they bite their tails to keep themselves warm, especially their noses and mouths.

According to Animal Planet, Snow Leopards do not bite their tails to keep their nose warm as has been stated. They bite (nibble) their tails or hold their tails in their mouths because they enjoy doing it as a distracting diversion, or as an act within play.

Unfortunately, there are only 4,000 to 6,000 snow leopards left in the wild around the world, mainly in Central and South Asia. Due to some illegal hunting activities people do, they have become extinct. Snow leopards are very sensitive, very mysterious animals, and we know just as much about these animals. However, animal protectors and wildlife warriors are taking extra precautions and doing their best to protect these animals.