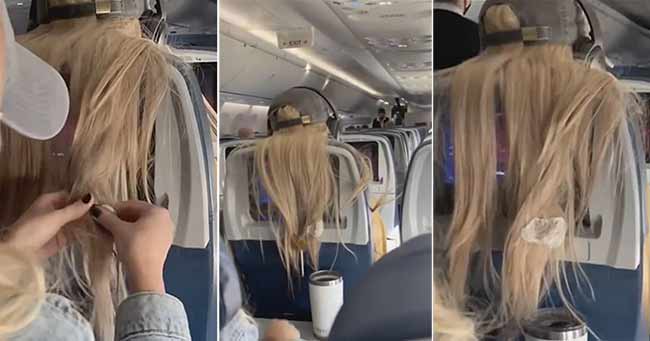 A furious woman was caught on video sticking a gum and a lollipop onto a woman’s hair after she blocked the view of the TV onboard. The video was posted on TikTok, causing a massive debate on who was in the wrong. There also were doubts that the incident was real.

An incident made a woman passenger furious that she attached a chewing gum and a lollipop onto another woman passenger’s hair who was seated in front of her. The woman’s hair apparently got into her coffee and blocked the screen of the TV.

The passenger in front of the angry woman deliberately blocked the screen of the TV with her long hair and apparently got into her coffee mug.

The incident was caught on video and was posted online, and has now gone viral.

The clip shows a woman passenger getting even after the woman in front of her continued to hang her hair behind her seat all through the duration of the flight.

She decided to take action with a gum she was chewing by sticking it into the woman’s long blonde hair.

A flight attendant who walked by saw what was going on but did not interfere.

The angry woman then gets a pair of nail clippers and cuts small fragments of the woman’s hair before sticking a lollipop she was previously chewing.

The footage was uploaded on TikTok on Friday, 27th of November, and has been viewed a million times, although some people who watched the video debated on whether it was fabricated.

Despite the vicious actions of the angry woman passenger, the onlookers still sided with her.

A TikTok user named Hayden wrote: “At first I sided with the woman in front, but after she kept getting her hair out, I felt she got what she deserved.”

Apparently, some people who watched the video clip doubted if the incident was real. A hint? Both the women passengers wore the same style of caps, so they were suggesting that they may be friends playing a prank on one other.

A woman named Julie Anne wrote: “You must know someone touched your hair.”

Others claimed that the passenger in front wore a wig and pretended that she did not know what was going on.

Another person wrote: “Come on, it’s a wig! Totally staged! Do you think after she flipped it, she didn’t feel any of it in her hair? Impossible!”