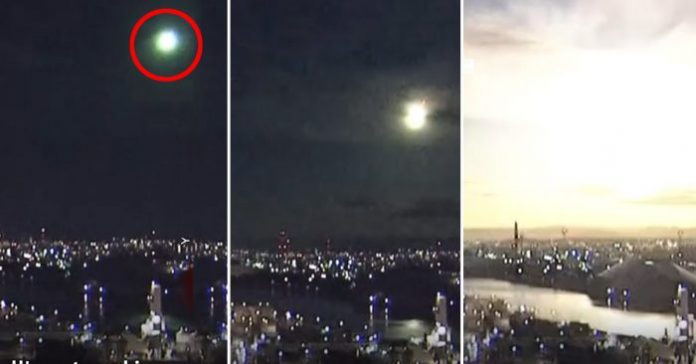 A strange phenomenon from space has attracted the attention of local news agencies and social media that it became viral in Japan and around the globe. A very bright fireball streaked through the night sky over central Japan on November 29. The object was seen and recorded from many parts of western and central Japan and was accompanied by a rumbling noise.

A brightly lit meteor crashed into the sky in Japan and produced stunning sightings of fireballs seen in several areas of Japan in an event that occurred on November 29.

The meteor shone brightly while plunging swiftly into the Earth’s atmosphere.

People from the west of Japan who witnessed the occurrence shared their rare experiences of the stunning phenomenon on different social media platforms.

NHK reported that cameras in central prefectures such as Aichi and Mie, as well as several other places, managed to capture the fireball phenomenon on video as it entered the sky in Japan.

Another camera in the port of Nagoya managed to capture a video of the meteor shining as bright as the full moon as it approaches the Earth.

Some experts say that since the meteor burst into pieces when it entered the atmosphere, some of them must have landed on the ground immediately.

Although, Japan’s National Astronomical Observatory said an average meteor landing would take place within a month.

Other experts say that they rarely see a bright light or hear rumbling sounds when meteor fragments enter the atmosphere and fall to earth.

Meteors can often be seen across the sky, but it very rare that they enter the Earth’s atmosphere at such a rapid rate. A large number of meteors that enter the earth are small.

NASA estimates as much as 48.5 fragments of meteorite debris fall to earth every day, but most of it evaporates as it through the earth’s atmosphere.

“The sky went bright for a moment and I felt strange because it couldn’t be lightning,” said one Twitter user who saw the fireball. “I felt the power of the universe!”

“Was that a fireball? I thought it was the end of the world…” said another, tweeting a video of the meteor captured while driving.