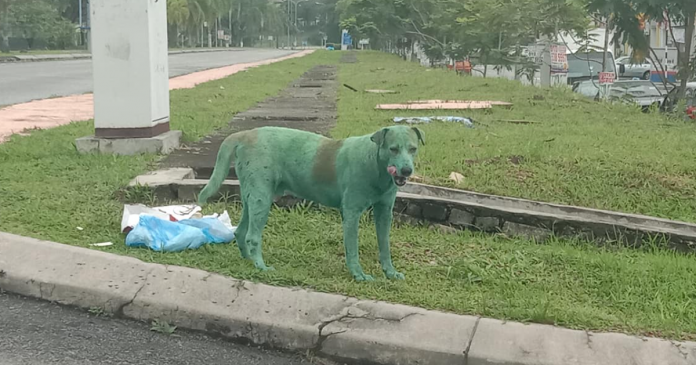 More and more animals are being spotted in hues unimaginable to human brains. Orange bird, blue cat and now another green dog!

A Facebook account owner, Shazreen Othuman had recently posted images of a green-tinged dog he found wandering around his neighborhood in Malaysia. Together with the pictures, he had expressed his resentment towards the mistreatment of strays.

According to him, the dog was scavenging for food at a dump site nearby, looking very malnourished. In one of the pictures, the canine was ripping the food remains off a plastic bag. It appeared that the dog was covered in green paint believed to be perpetrated by some irresponsible humans.

“I do not think he has an owner. Whoever did this to such an innocent being must be an idiot, what mentality do some humans have,” his message read. Within minutes, his post received more than 1400 shares and close to 1000 likes and about 500 comments flooded in.

Netizens were largely annoyed and raged at the the sight of the poor dog.

Many have come forward to offer their help to buy some food and find proper shelter for the abused dog. A good number of them even tagged the local animal shelters to raise attention to the issue.

Few fortunate days later, the current condition of the dog was updated and it turned out that the dog wasn’t abused. Instead, he had been frequenting a construction site nearby where he had fun covering himself in some green powder found there.

He was then washed up clean and tended to by the workers at the site. Thankfully, the green powder wasn’t harmful to him. Netizens were happy to have received the news, considering it was the very social media that spread the news and initiated the action to be taken.

Paints and dyes of any sort are harmful to dogs, and animals in general. They are heavily laced with chemicals and if exposed long enough, will cause severe complications which include irritated skin, burning and swelling as well as infections and poisoning.

Friendly Orangutan Would Not Let Go a Female Tourist and Wanted...