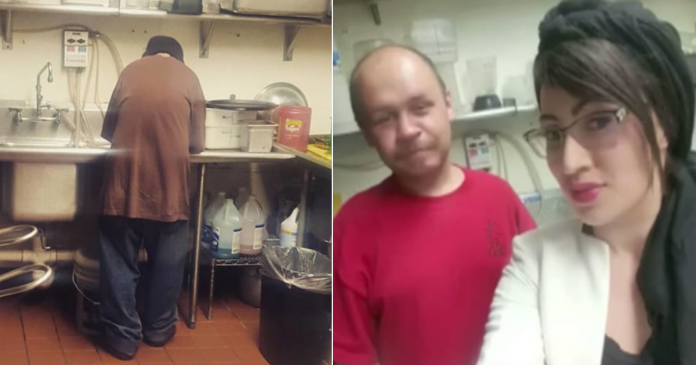 Meet Cesia Abigail Baires. She is the owner of a café called Abi’s Café in Minneapolis. She is also known for helping people who are in need, so when a homeless man entered her café asking for a few dollars, she gave him a job instead, so he may earn more.

Cesia wanted to know more about the homeless man and his situation. “Would you like to have a job?” she asked, “You know nothing is given to me for free.”

The homeless man felt sad while he explained his situation to her. He was searching for a job for quite some time, and although he was willing to take any type of steady work, nobody would hire him due to his multiple felonies.

Casia gave it a thought, and without hesitation, gave him an offer she knew he would not refuse… a job in her restaurant. She has shared this moment on Facebook.

“I was short staffed that day,” Cesia shared on Facebook. “So I offered him a job. His smile and facial expression really made my day!!!”

“I’ll do anything to earn for some more food.” He excitedly replied.

“So I hired him as a dishwasher for two weeks, and he always comes on time for his two-hour shift. He also helps take out the trash.”

“Once he gets paid, he buys food from my restaurant. And because he decides to pay, he says it gives him a sense of satisfaction for a job well done!”

Marcus is the name of the homeless man, and he has never missed a shift up to this day. Cesia made a big difference in his life by offering him a job, and this changed his life forever.

“Do something nice for someone today and don’t judge them just because they are out there asking for money for we don’t know their situation… some deserve another shot,” Cesia shared on her Facebook.

Here is a video to make you smile.