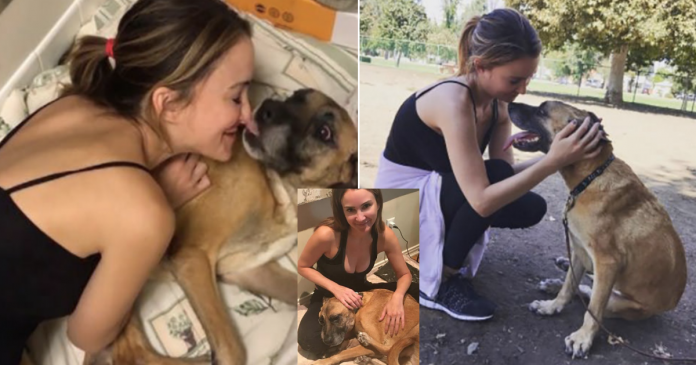 She was abused and maltreated. She is safe now and deserved to be cared for and loved.

“I’ve rescued thousands of dogs, but this dog has changed my life. She is the most forgiving, sweetest dog. All she wants to do is love and be loved in return.” ~ Shira Astrof

Ruby. That is the name Shira Astrof has given to the dog. She no longer wants to use the dog’s old name so she may forget the time she was abused by her former owner. “A new name for a new beginning,” Astrof, a volunteer for Care Rescue LA., a rescue group that helped save Ruby, informed The Dodo.

In July of 2017, Ruby was rescued from her owner and brought to the shelter in West Valley, L.A. Her former owner will be charged with animal abuse and undergo a trial. Ruby was sick, injured, and traumatized at that time due to years of abuse.

“I have learned that she was adopted at the pound in West Valley 6 years ago, and she was 10 months old then. She was this healthy and beautiful mix of a German Shepherd and other breeds,” Astrof said. “Then 6 years later was brought to the shelter by the police and was this scrawny, 40-pound dog whose legs are injured.”

When Astrof first looked at Ruby, she already knew that the dog has gone through abuse and mistreatment, though she had no idea about the details of the case filed against Ruby’s former owner.

“They said Ruby stayed in a dog crate for 6 years, that’s why her hind legs are very thin. She looks like she has been beaten, too.”

When Ruby was rescued and brought to the shelter, things got better for her. Initially, she had to be confined in a separate room while the authorities were still gathering evidence against her former owner.

“When she was in that separate room, she did not want to eat or do anything. She was so depressed, they thought she was going to die in there.” Astrof said.

Then Astrof stepped in to help. She watched a video of Ruby at the shelter, then reached out to the staff and police and made an arrangement with them. If they allow Astrof to take Ruby home, she would step in and help them continue to gather evidence and will send them updates and Ruby’s medical records. Ruby got better when she arrived in Astrof’s home.

“When she arrived, Ruby started trusting me, and she just loves everybody! She believed me when I said that she is already safe, and nobody will ever hurt her again.” Astrof was surprised at how Ruby was reacting to other people who came to meet her. She was expecting RUby to be aloof and withdrawn after what she has gone through for years, but she did just the opposite. She welcomed them with excitement.

“She has no fear towards anyone or anything. She gets excited when a person or any other animal would come and visit. She wags her tail which is a sign of excitement. She loves both dogs and cats, and even the people who approach her. It’s such a testament to how dogs are different than people. Ruby knows she has been rescued and is saved. She knows she is home now.”

Although Ruby knows the physical challenges and pain she has to overcome, she is not reluctant to do so. She has to gain weight, closer to 90-lbs., and she only weighs a little over 40-lbs. She also has to heal from the physical pain she is experiencing.

“Her body is still in such a terrible physical state,” Astrof said. “When she comes to bed and lies down beside me, it takes time for her to get comfortable. Her whole body is injured, and when she tries to re-adjust herself, she falls on top of me. You will know that she is in a lot of pain even if she doesn’t make a sound.”

Ruby also has some psychological trauma to work through.

“Even if she’s in severe pain, she will not go to the bathroom inside of the house, no matter what — she’s scared to,” Astrof said. “If she’s not carried outside, she will hold it and it’s definitely a fear-driven thing. Her abuser probably instilled that in her.”

Ruby gets regular acupuncture treatments, massages and aqua therapy sessions to get better. Astrof and her friend, Maria, Ruby’s current foster caretaker, makes sure that Ruby gets guided in doing so.

“We’re doing everything to make her get better. Ruby goes to the vet every other day for check-ups and vaccination.”

Ruby loves doing a lot of dog activities, like going to the park for a stroll with Astrof. Eventually, enjoyable activities like these will help her get over her trauma.

“She savors every moment of life’s enjoyment that she did not have before,” Astrof said, “Even if you can see that she is in pain during her walks, she likes to enjoy every minute of them. Though she makes us know if she wants to be carried.”

Ruby loves cats, too, although they don’t like her too much in return. “You can see her excitement when she sees my cats. She plays with them, licks them, and cuddles them. My cats like her for a while, then they swat her when they had enough. It’s hilarious!”

The cats may not be fond of Ruby, but Astrof adores her very much.

“I love Ruby with all my heart!” she said. “We have rescued thousands of dogs, but Ruby has changed my life. She is the sweetest dog I have ever met and the most forgiving. All Ruby wanted was to love and be loved in return.”

For the past 15 years, loyal golden retriever picked up newspapers...