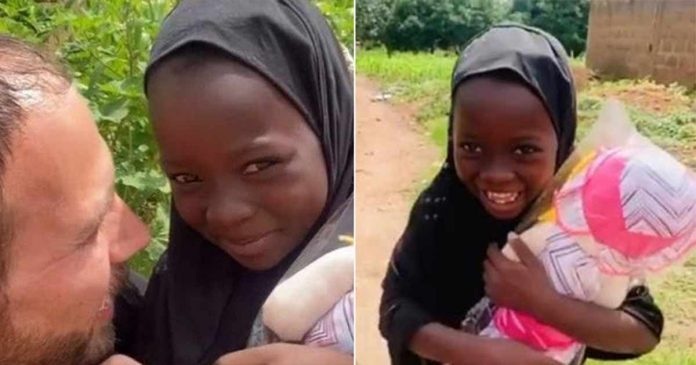 Despite being surrounded by people at all hours of the day, orphanage life can be lonely. It’s simply an aspect of the world that most people are infrequently exposed to.

The truth is life in an orphanage is one of change. Caregivers come and go. So do peers. The orphan is rarely alone, but there is often a distinct lack of closeness in the relationships the orphan has.

The closest the orphan can ever imagine getting to is usually a gift of a toy, a doll for a girl and toy car for the boy. It is something an orphan holds close to his or her heart, providing a sense of security

That exactly was in the case of Cemil, a little girl who lost her parents, and with no one to care for, she ended up in an orphanage. Life wasn’t a bed of roses in the orphanage for Cemil, whose eyes reflected the pain and misery of the years she lived with her parents in a poverty-stricken slum.

But fortunately, there are human beings whose life mission is reaching out to orphaned children and make them feel wanted. Social activist Bilal Erkus is a fine example of one such person whose warmth often make orphans forget their loneliness.

He travels around, dropping by orphanages with gifts, interacts with orphans and uploads videos on his social media page of his visits. His page has touched millions of hearts around the world.

His meeting with Cemil, in an orphanage in Nigeria, is a fine example of how kids react when they receive a surprise gift. A picture paints a thousand words, and you should see the expression of excitement and innocence on her face when Bilal surprised her with the doll.

He tells Cemil: “Close your eyes.” Though stricken with curiosity, she closes her eyes and waits for Bilal’s signal.

When she opened her eyes, she almost fell over when she saw Bilal holding right in front of her a dainty doll. She grabbed the doll, hugged it close to her heart, laughing uncontrollably.

Bilal, touched by her spontaneous display of affection, hugged Cemil whose face glowed with radiance.

She just could not believe she was holding a delicate and beautiful doll that would become her playmate in her arms.

Bilal had the scene videoed to share with his online followers his feelings upon meeting Cemil. The video had thousands of views and comments, mostly congratulating him for a very unselfish act and setting an example for others to emulate.

The majority of his followers from Turkey expressed their admiration for the great work Bilal was doing to bring smiles back to the faces of these orphans.

“The happiness of the children is priceless, the girl’s smile makes anyone’s heart happy,” commented one of Bilal’s followers.

Millions of children, namely, orphans grow up without knowing the good side of humanity and it takes people like Bilal to these kids that there are people out there who care for them, think about them and long to interact with them.

The truth is when left unloved and uncared for, children conclude they are unworthy and unvalued. That is where we have to step in to break that perception.