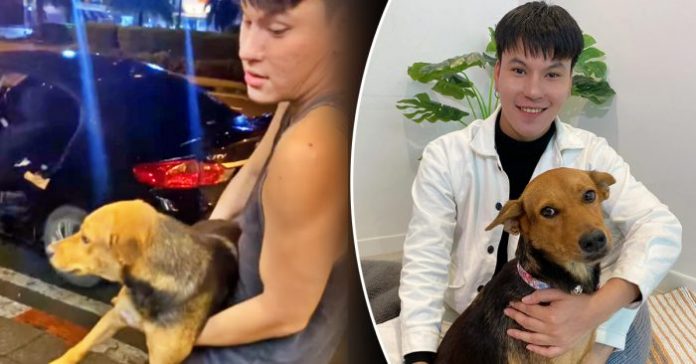 Yutthaphum Kaewekhem, nicknamed Boom, from Thailand, was having dinner with a friend in a mookata restaurant late at night on October 2.

Drunk and Ready to Go

Several drinks later, when Boom was about to head to the car, he decided to bring home a dog he saw at the sidewalk. In the video, you will notice that the dog keeps jumping out of the car no matter how Boom manages to put the dog back in. Originally there were two dogs that he wanted to take with him. One was color white and the other, black and brown. After several tries, he finally managed to bring home the black-and-brown dog.

Boom wrote in a Facebook post: “My friend did not know how to stop me. So, instead, she took a video of me taking a dog before driving us home. This restaurant is just next to our village.”

The following morning, Boom’s reaction was caught on video

When he woke up the next day, he was surprised and confused that a dog was walking around the house. The video soon went viral since Boom had many followers, and they wanted to know what he did next.

Back where they met

Boom decided to bring the dog back where he got her. He went back to the restaurant and gave her food, intending to leave the dog there. When he found out that nobody owned the stray dog, Boom finally decided to keep her… for good.

A heart-warming ending for both human and pup.

In the end, Boom announced on Facebook that he will be taking care of the dog. Boom has given a name for his new pup, Moo Ta, inspired by the place where they first met. Moo Ta was then brought to the vet for a health check-up and was given vaccinations. She has also been groomed, given clothing and supplies.

The story has touched so many hearts that it has been shared 55,000 times on Facebook.