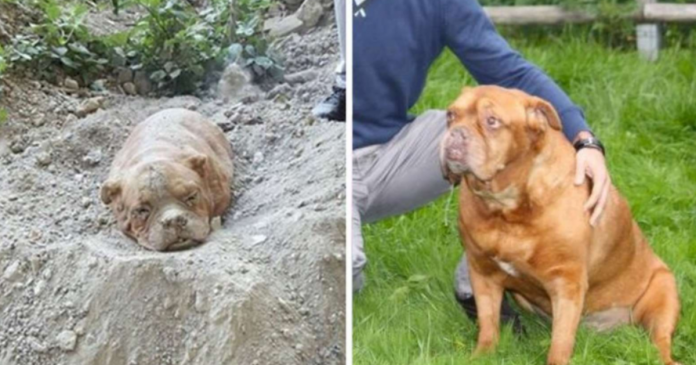 The owner didn’t want his dog, a French Mastiff anymore and so he found the most inhuman, unconscionable and easiest way to get rid of her. He buried her alive in dirt and stones and left to die.

The problem was the 10-year old Mastiff was not ready to die. She was struggling to stay alive in her “grave”, hoping someone would spot and save her from certain death.

Luckily, animal lover Pedro Dinis, was walking his own dog, a pit bull, through the empty lot where the Mastiff was buried.

He noticed something sticking out of the dirt and when his pit bull reacted he stopped to have a closer look.

What he saw froze him. It was a dog’s head barely visible in the mound of dirt. Noticing that the dog was still alive, Pedro and his dog quickly got into action to save the mastiff.

The mastiff, which Pedro named “Athena (after the Greek Goddess of War) had managed to free her head most likely because she was buried pretty shallow in the vacant lot.

As Pedro found out while digging to rescue the dog, Athena wasn’t able to fully free herself because she was anchored into the ground by her leash which was tied to a heavy bag of rocks.

The owner had obviously wanted to make sure his dog did not escape from the hell hole!

Pedro found the mastiff, covered in dirt, was weak and dehydrated, indicating that she must have been buried a few hours ago.

It was a case of being at the right place and the right time. Athena stayed calm, possibly because of the pit bull’s presence, as Pedro carefully removed the dirt and stones to free the mastiff from her would-be grave.

“Only her head was visible and it was difficult to see given the amount of earth covering her,” Pedro wrote on Facebook, adding that he was “in the right place at the right time to save a life.”

Pedro didn’t want to hurt or panic Athena by using a shovel, so used his hands to scoop away the dirt. As he worked to free her, he made sure to feed Athena lots of water in order to rehydrate her.

Finally Athena was free! But she was too weak to move.

Pedro took her to a veterinary clinic where she was treated for shock and dehydration with intra venous fluids.

The veterinarian also discovered that there were ample signs that Athena, which was afflicted with arthritis, had been subject to lifetime of abuse.

After treatment, Athena was taken in by the animal rescue, SOS Dogue De Bordeaux. In the months since her rescue, Athena was adopted by Mr. and Mrs. Delfosse, the founders of the rescue where she found comfort and happiness, pending the court case against the owner.

As Athena had a permanent identification, the authorities were able to trace her owner who was living not far from the vacant lot in Paris where the dog was buried alive.

The dog’s owner, a 21-year-old Frenchman, tried to get off the hook by claiming that his dog had run away and denied any knowledge of what happened to his dog.

With Athena’s story capturing the minds of social media followers, who petitioned for maximum sentencing of two years in prison as well as about $33,000 in fine be imposed on the owner for cruelty to animals, the French court banned the Frenchman from owning a dog for 5 years, fined $33,000 and given an 8-month suspended prison sentence.

As for dog’s saviour, Pedro said he shared the photos of Athena’s rescue to raise awareness about animal cruelty.

A few months after the owner was convicted, Athena passed away peacefully under the loving care of her adopted family.