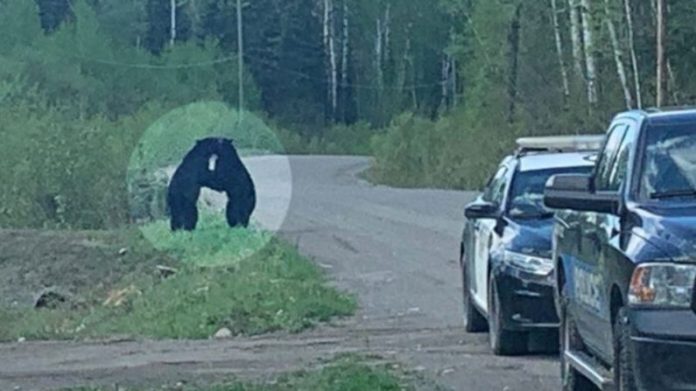 In a rural municipality of Armstrong near Thunder Bay in northwestern Ontario, Canada, a rare photograph of 2 black bears seen kissing by the road, has warmed the hearts of social media netizens.

Ontario Provincial Police (OPP) officers were returning to their cars after being on foot patrol and could not believe their own eyes upon seeing 2 black bears standing on their hind legs, hugging, and sharing a moment of privacy on the road. Admiring the unbelievable sight, a policewoman decided to photograph the wonderful moment.

It was on May 28 when the OPP department has posted the photos on Twitter, which said: “Just a reminder about bears: black bears are among the biggest and most powerful animals on the planet, policewoman Nicole Haueisen somehow managed to take these great photos.”

The tweet went on to say. “The Northern Police Department on patrol that day had a very unique and exceptional experience.”

This rare moment not only allowed them to take photos of the bears kissing but also walking hand in hand on the road. Referring to this very special moment, a member of the OPP department told Epoch Times, in a Facebook post, that police officers encounter these kinds of bears every day. However, they said that this was special. “It is not every day that you get to see this rare moment.”

As expected, when the incredible photos were shared on the OPP’s Facebook page, the post immediately went viral with more than 1,900 shares. Social media users immediately posted their comments and shared their own version of what the 2 black bears were doing.

One social media user wrote: “They remind me of two old people at church kissing after the service…”

While another wrote: “Oh… What beautiful pictures! Looks like an old romantic couple walking around!”

A third social media user joked about the 2 bears being arrested, saying, ” I think these are the photos taken before they were arrested for intersecting with the police cars. The first photo is when they were being brought in, the second photo talking about how the police cars took the turn at high speed, and the third photo is when they were laughing about how they will never get caught in the forest. But eventually, police officer Nicole took them into custody.”

Some of the netizens commented on the bears’ disregard for respecting the rules of social distancing due to the current pandemic.

Regardless of what the social media users were thinking about what these bears were up to, what is utmost certain is that everyone left the premises unharmed.