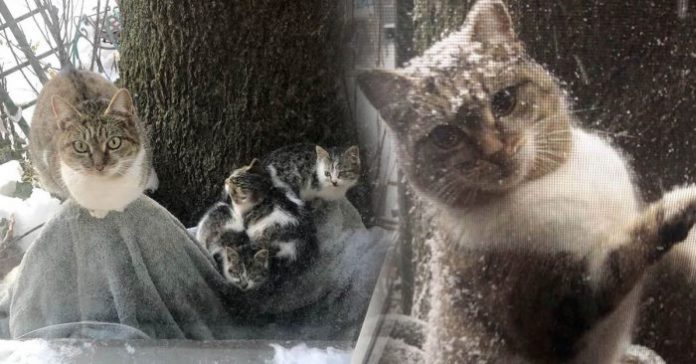 It was bitter cold day in New York with the weather reaching incredibly low temperatures. As the heavy snow fall swept through the city, a stray cat was desperately trying to find a warm place for her kittens.

Renee Becerra, a dedicated caregiver to the neighbourhood cats, was sleeping in the comfort of her bedroom when she was awakened by some scratching sounds outside the window. Waking up, she saw a cat, peeking through the glass window as if asking for some help. For the cat wasn’t alone. She had her kittens with her.

Renee sensed the cat was looking for a warm place for her kittens which were shivering in the cold air outside. As she got closer to the window, the skittish cat would run away, leaving her kittens behind.

There was no doubt the cat wanted some form of help – the very reason she was “knocking” at the window but she appeared to be more concerned about the fate of her babies.

“It took a while to figure out what was the best thing to do for all of them since she was obviously around and providing them care, but it was bitterly cold outside,” Renee told Love Meow.

She came up with an idea to build a winter shelter, stocked with cat food for the mama cat and her babies.

Renee’s hunch was right. The cat moved in with her babies and found some comfort in the winter shelter to escape the bitter cold. But sadly, one of her babies, already weakened by the freezing temperatures before the cat sought help, didn’t survive.

Obviously, the winter shelter wasn’t enough for the cat and her babies to pull through the winter.
Renee and her fiancé, Nathaniel Styer, made a quick decision. They gathered supplies along with the kittens and brought them indoors.

“The mama cat disappeared before we could trap her,” she said, adding they had no idea where the cat went nor did she return looking for her babies in the two months the couple fostered the kitties.

Renee turned over the kittens to the New York branch of the American Society for the Prevention of Cruelty to Animals (ASPCA) to help find a “forever home” for the kittens.

That wasn’t the end of the story for Renee. Weeks later, when New York was again hit by a severe snow squall, Renee heard some scratching sounds outside the same window.

Oh, my God! Has the mama cat returned to claim her babies? As she turned around in the direction of the window, sure enough there was the same cat creating some commotion! What kind of help was she looking for this time?

The tabby cat, whom Renee and Nathaniel named Chunk Chunk, was rubbing and scratching the glass screen, as if pleading to be let in.

This time the cat didn’t run away.

Nathaniel saw that one of her ears was tipped, indicating she had been trapped and spayed. “Obviously someone has helped her out before,” he said.

He surmised that as the intense snow storm rolled in, got stuck in it. It was obvious that she was in a state of panic and wanted out of it.

He opened the window and Chunk Chunk hopped right in.

Initially, the cat appeared to be a bit nervous but escaping from the freezing cold outside was a far better option.
Nathaniel managed to calm her down by getting her into the bathroom.

On seeing Renee, the cat seemed to recognise her. “She was hiding behind our toilet when I first saw her, but when I put my hand towards her she started purring immediately.”

The couple is thinking about adopting Chunk Chunk after a check-up with a vet.

Said a cheerful Renee: “I’ve taken to calling her ‘love bug’ because she is so sweet. She’s a quiet little thing but she’ll mew very softly when she wants attention.”

Orphaned seal pup stuck in mud saved by a group of...