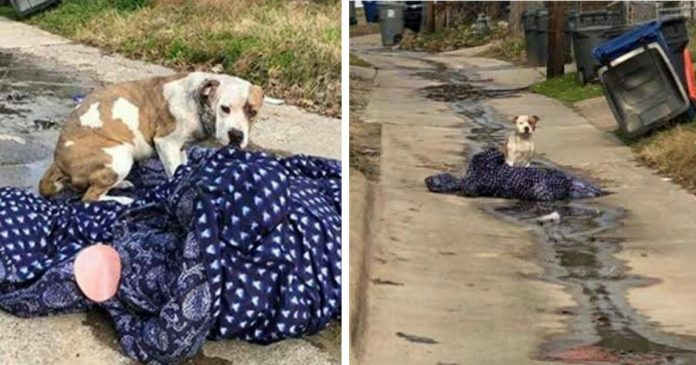 As Dallas was caught up in the euphoria of New Year countdown, somewhere in the suburbs of the city was a pathetic sight of a dog clinging on to a tattered blanket in the back alley.

The dog’s owner had dumped the forlorn-looking canine on New Year’s Eve, along with their unwanted belongings, which included the blanket, when they moved to a new house in the city.

As if abandoning the dog and treating her like trash was not inhuman enough, the family didn’t even provide any food or water.

The confused dog, instead of trying to find food or a sheltered area, chose to stay on her blanket, waiting for her owner to return. Little did the dog realize her owner were never to return.

Marina Tarashevska, the co-founder of Dallas DogRRR, was walking along the back alley when she spotted the dog curled up on a blanket surrounded by some discarded household items. The dog was shivering in the cold winter temperatures.

Neighbours in the area told Marina that the dog’s owner abandoned her on New Year Eve.
Marina noticed that the dog, which she named Camilla, looked scared of strangers and didn’t want to leave the spot where her owner had left her.

Dogs are known to be extremely sentimental and show possessiveness towards their belongings, which includes their owner, toys, home and blankets.

Which is why Camilla was sticking to her only possession, a blanket, even after the owner abandoned her, said Marina.

Along with the help of Patti Dawson, executive director of Dallas DogRRR, Marina approached the dog and each time she got close, the dog would run away. The dog would come back out and sit on the blanket again when Marina backed off.

Not the type to give up as an animal activist, Marina came up with a plan to lure the dog. Each time Camilla ran off, Marina pulled the blanket down the alleyway closer toward her car.

It took more than an hour for Marina to lure the dog closer to her car with the blanket. When Camilla was close enough to the car, she grabbed the dog and put her into the dog cage.

Soon, Camilla was back at the rescue centre, safe for the first time in her life.

The centre’s veterinarian treated Camilla for some ear infection and neck injuries, possibly caused during a fight with another dog.

Initially, Camilla was apprehensive of the environment. She was also avoiding eye contact, a sign of mistrust of human beings. But she soon formed a connection with the humans there, who treated her with the love that she had always deserved.

According to Patti, Camilla is making great progress and now feels safer with people. “She’s doing great. Her personality is slowly coming out, and she’s starting to trust,” Patti said, adding Camilla, who is currently in a foster home, is waiting for a loving family to adopt her.

Dog lovers have shown much sympathy over Camilla’s maltreatment with one social media user, commenting “ We as humans have many ppl surrounding us ….whenever we need… but our pets have only us. Also they have a short life….so why not give them all the love possible.”