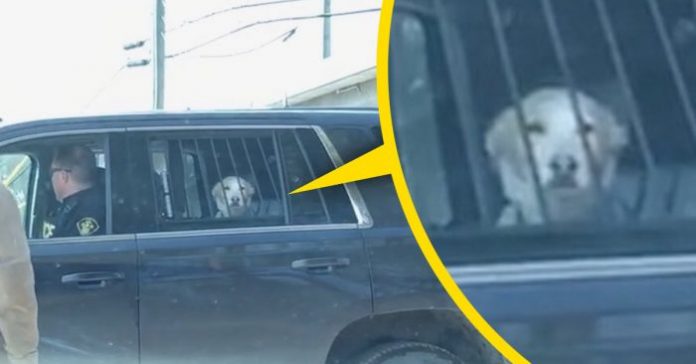 Pet owners usually put their beloved pets on leash before taking them out in public to avoid them from escaping or making commotion.

One day, Emma Thompson and her father, Reid Thompson with his girlfriend went out for a walk at the park when Reid decided that they will let their dog, Finn walk around freely that day.

Normally, Finn would usually just walk near them most of the time even without a leash, but that day – it suddenly runs so fast and so far that he couldn’t be found.

Apparently, it turned out that Finn behaved very strangely that day because it saw a deer. According to Emma, Finn generally wasn’t very fond of deer.

Looking at the footprints, it can be seen that Finn has chased the deer but to no avail as the deer was faster. Unfortunately, this commotion was witnessed by someone in the city, which later lodged a police report. Hence, the police had no choice other than to arrest Finn and take it in an official police ride.

While feeling sorry and sad about her dog getting arrested, Emma can’t help to be amused after looking at Finn’s sympathetic expression inside the police vehicle.

Look at that expression!

Thankfully, after the police met Finn’s owner, Emma, the dog was released and the owner was advised to always put it on a leash in public to avoid commotion like this one.

Most people are as amused as Emma after looking at the picture and glad that this little story brings laugh to their day.

Such a funny dog!