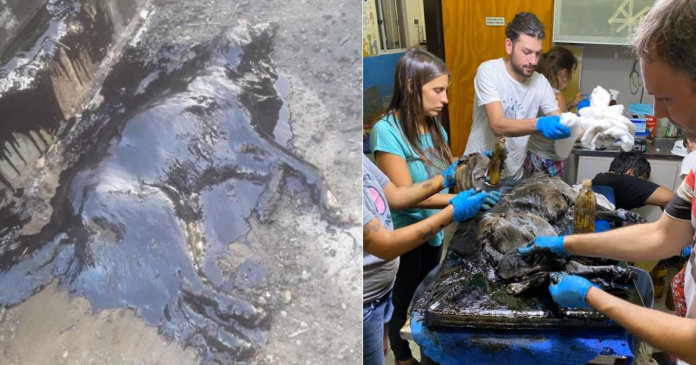 In Libertad, Merlo, a dog named Aloe was found covered in tar thoroughly all over her body, whether she fell in or was thrown into the pit remains uncertain. Locals say a group of kids heard barking from other dogs which led them to discover the dog’s plight and immediately alert the others for help.

Parents started contacting Libertad’s Volunteer Firefighters and eventually, an Argentinian non-profit organization called “Proyecto 4 Patas” joined in the rescue operation to help the dog. In the organization’s Facebook page, they posted their response to the situation, mentioning that they were shocked and have never witnessed an animal in this condition. Nonetheless, they still tried their best to free Aloe.

First aid was given to the dog on the spot thanks to the help from the locals. 9 gruesome non-stop hours with only 8 volunteers, 50 litres of oil and 3 baths was what it took to clean the tar from Aloe’s body.

According to Bored Panda, the organisation was afraid Aloe would die while they were cleaning her body. They couldn’t fathom how much it hurts and the helplessness of not being able to move for a long period of time. However, their worries eased when they carried out the first bath. The dog seemed to have relaxed compared to before.

A representative of “Proyecto 4 Patas” spoke to Bored Panda in hopes that Aloe’s recovery is relayed to the masses. The dog’s condition was improving and she was soon acting lovingly and energetic to her caretakers. It was mentioned that the organisation was focusing on her health and when all is well, they will try to find a forever home for Aloe.

It is recommended to contact your local authorities or an animal rights group as soon as an animal is spotted to be in trouble. In this case, if an animal is covered in tar, the best solution is to apply and massage lots of vegetable oil which will help loosen the tar off the animal’s body and the cleaning. Kerosene is not recommended as it will likely cause damage to the animal’s skin.

And here’s Aloe’s revived form after her near-death experience and miracle recovery!

Share the story of Aloe to your family and friends!