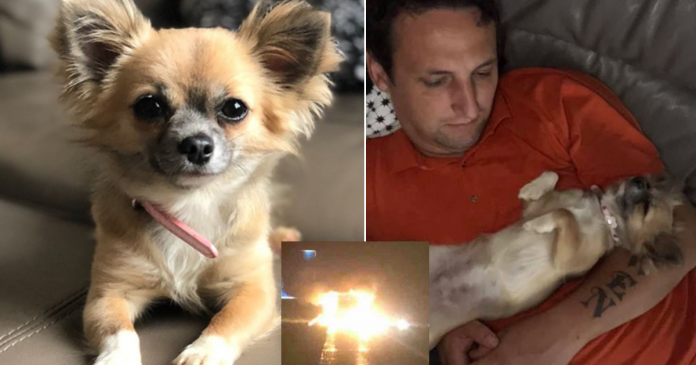 What drives a dog to risk its own life for humans? Love? Gratitude? Preservation of the life it holds dear?

All of these things may play a role, but recent research suggests it comes down to empathy. Maybe that was the reason that drove Coco, an adorable chihuahua, to rush back into a burning van to save her family when an explosion snuffed away her life.

Dan and Cara Farrant were on a road trip from their home in England to Scotland with their three sons, aged five, six, nine as well as their three-year-old daughter and their pet dog when they noticed smoke starting to billow out from the engine of the campervan.

As Dan, 34, was pulling over to the roadside, flames were starting to reach out from under the hood of the van.
Dan managed to get his three sons out of the van, but his wife Cara and their daughter, Thea were trapped inside as the passenger side door was jammed. Cara tossed Coco out of the window in desperation.

With the help of a stranger, Dan pried open the back doors of the van, releasing his wife and daughter, but Coco thought they were still in the vehicle. Perhaps hoping to rescue them herself, Coco ran back into the burning van.

Sadly, the family didn’t realize what Coco had done until it was too late. The van exploded on the A74 near Moffatt, Scotland. When firefighters arrived they found Coco’s body under the front seat. She had huddled there hoping to be safe from the fire.

A devastated Dan, who runs a removals firm in Folkestone, Kent, in recounting the ordeal said: “I was only a few seconds away from losing my wife and my little girl. Instead we lost our best companion, our angel Coco who we’ve had for two years.”

He said his children are suffering and having nightmares. “They knew Coco had gone back into the burning van and watched our vehicle explode in front of them with their beloved dog inside.”

“We tried to run back, but the van exploded with Coco inside,” Dan said, adding he has no feelings other than just numbness.
“My family nearly ended up from being six of us to being four in less than a few seconds,” he said, his eyes displaying a huge sense of loss.

Cara said Coco was the glue to the family. “If one of us was sad or ill she would stay with that person.”

She sensed that Coco must have run back to the van to help when the dog heard Cara screaming. ”I just wish Coco didn’t run back in to help me.”

Cara said she was just lucky it wasn’t her or her daughter who came close to losing their lives. “But I will never get over losing Coco.”

Along with Coco, the Farrants lost their Christmas presents, some clothes, and the new campervan they had just purchased. To make matters worse, none of the losses was covered by insurance.

The GoFundMe campaign, set up by supportive community within days of the tragic incident, met its goal of £3,000 (about $3,822) to help the family replace the personal items they lost in the fire.

Coco might not have been a big dog, but she will always be remembered for her big heart and for her unwavering loyalty and empathy towards her family until the day she died.

A pet can add structure to our day and even provide a sense of meaning or purpose. So, when a cherished pet, like Coco dies, it’s normal to feel racked by grief and loss.