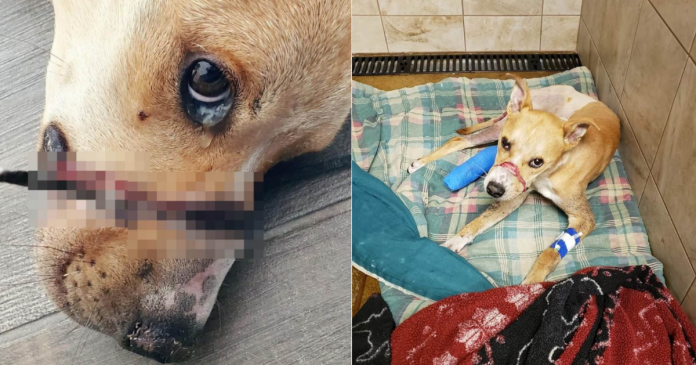 Animals have same feelings just like human-beings and animal abuse is considered a serious crime in most countries!

Recently in St. Paul, an one-year-old puppy was found tied to a tree by his back leg and his mouth was zip-tied shut so that he can’t bark to alert people and escape.

The young St. Paul pup has experienced horrible levels of animal cruelty done by this unknown cruel person or persons.

It’s estimated by St. Paul Animal Control that this puppy named Riptide has been tied on the tree for about 2 weeks. He was extremely malnourished and injured terribly when the rescuers first found him.

“Words are not able to explain what this guy went through,” rescuers from Rescued Pets are Wonderful, wrote on Facebook.

“He is maybe a year old and he was left in the woods, tied to a tree by his back leg with a zip tie around his muzzle. The rope around his leg was cutting into his leg to the bone. The ziptie around his muzzle was embedded to the bone on top and underneath. The maggots were everywhere,” rescuers explained. “This guy endured days… weeks like this. He survived and we intend to give him our all to get him back to health.”

The Humane Society of the United States announced the reward of $10,000 for information that leads to the identification, arrest and conviction of the person or persons who abandoned a dog in a wooded area near 4th and Clarence streets in St. Paul.

“The level of cruelty this dog endured is difficult to put into words,” Christine Coughlin, the Minnesota state director for the Humane Society of the United States, said. “We hope our reward helps find the person or persons who committed this heinous act.”

Riptide was seen crying when the rescuers first found him

Riptide’s rescuers have set up a fundraising page to support the dog’s rehabilitation and recovery and they have successfully raised more then $20,000.

Veterinarians have amputated the pup’s back leg, while the deep cuts on his muzzle will require even more surgical treatment.

Let’s check out the latest video of recovery process of Riptide. We hope this doggo can live a normal life under good care of kind people.