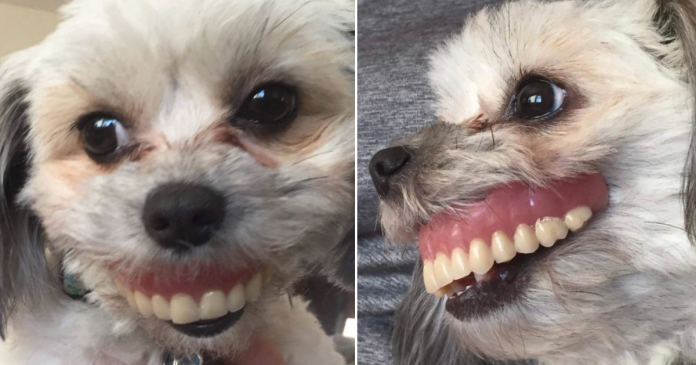 Dog owners can agree that their dogs are not well behaved all the time. Dogs could be mischievous and naughty at some points and causing troubles, but at the end, dog owners would forgive them as they ultimately bring more joys to us.

A Twitter user, Eunice, shared how her four-legged friend Maggie did the most hilarious antic that made Maggie an internet sensation.

Maggie is actually not a purebred dog, but a mixed breed of Shih Tzu, Poodle and Chihuahua, but it seems to combine the cuteness of each dog. Maggie is like a little girl, with a unique double ponytail.

Maggie lives with its owner Eunice and her extended family. This is also convenient for Eunice. When she goes to work, she doesn’t have to worry about no one to take care of her dog. Her father is always by his side to take care of Maggie!

Eunice’s father usually lives with dentures, but he doesn’t like to sleep with dentures very much. He thinks it will hurt his gums. Eunice said that one day her father did not put the dentures in the bathroom, but instead put them on the sofa. When her father fell asleep and didn’t care about the dog, Maggie stole the dentures and somehow got it stuck on her mouth.

When Eunice’s father returned to the living room after his nap, he found Maggie under the living room table, grinning with his dentures. Seeing the dog’s puzzling mischief, Eunice couldn’t help but taking a few pictures of it and the photos quickly became viral.

Do you have similar story to tell about your dog’s mischievous behavior? Let us know in the comment what you think about these funny photo. If these photos cheer you up, please share them with your friends and family.