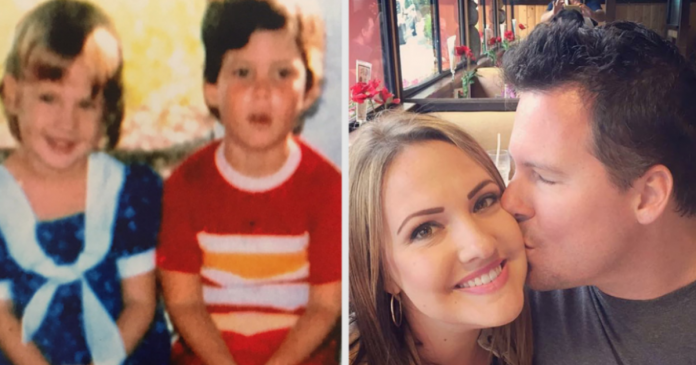 The saying “Love finds its own way” may seem an old cliché to many people but not for these lovebirds who met again 30 years after they became each other’s childhood crush.

33-year-old Justin Pounders met the love of his life, Amy Giberson on match.com where he fell in love at first sight with her.

“She just had this great energy, you could tell. I can’t explain it, but I knew I had to get to know this girl,” Justin told People Magazine in an interview.

However, it only came to light a year later that their love story has gone way back years ago when Justin joked that he loved Amy’s name because he had a crush on a girl with a similar name during preschool.

That was when both Amy and Justin realised that they actually went to the same preschool, Sunshine Preschool in St. Petersburg, Florida, back then and at the same time.

The couple later asked their parents to dig up their childhood photos and turned out, the girl which Justin developed a crush on was Amy!

“Justin’s mom found a photo of the two of us together and I just started crying, I was ecstatic. I was the Amy he had liked all those years ago! It was definitely meant to be,” Amy said.

According to the couple, they spent a lot of time playing together during preschool; building blocks, playing tag and sitting next to each other during lunch.

Little did the 3-year-old Amy and Justin realise that their close friendship would turn into a lifetime relationship three decades later.

As for Justin, he believed that their meeting was fate by the “higher power” despite living in the same area for years before they could find each other.

“Someone or something definitely decided we weren’t supposed to reconnect until now,” Justin said.

“We’ve been so close to finding each other this whole time but didn’t until the time was right. And that’s now.”