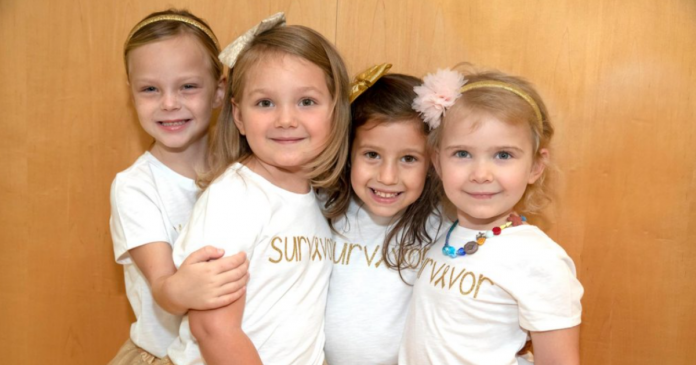 Friendships are one of those rare bonds where strangers become inseparable soulmates out of genuine respect and admiration for one another without expecting anything in return.

What makes friendship more interesting is when it buds from young. The four little girls share such amazing friendship, which bloomed in an unlikely place at unfortunate circumstance.

McKinley, Chloe, Ava and Lauren met at the Johns Hopkins Hospital in Florida four years ago. All four of them were admitted for one common reason; to receive treatment for cancer.

Every year, without fail, the now four and five year olds gather to take a group picture together, all dressed up with the brightest smile lighting up their faces.

McKinley, Ava and Lauren all had acute lymphoblastic leukemia and Chloe had a rare form of lung cancer. The four girls soon started seeing one another often and became good friends.

Their moms recall their daughters supporting each other to get through the painstaking procedures.

“She’s 3 years old and doesn’t have any hair, but all of her friends in the hospital look the same way so it kind of gave her some normalcy,”  Lauren’s mom Shawna Glynn said to People.

Ava’s mom, Alyssa Luciano emotionally added, “They were all on active treatment the first time we did this. It’s amazing to see how far they’ve come from being bald little babies.”

“It was just always a breath of fresh air to see a familiar face and to know that she wasn’t alone in this,” expressed Karen Moore, McKinley’s mom.

Just like the girls, the moms also offered each other emotional and moral support. “Just having other moms to relate to has been phenomenal. Just to have other people going through it at the same time as us,” Karen relieves.

Every year, the girls have been taking a photo together as a tradition and reminder to tell themselves how far they’ve come along. However, 2018 was special because it was the year all four of them were finally in remission.

Though Lauren was the last one to finish her treatment, the girls and their mothers are thankful they are able to make it every year for the photo shoot, a proof of their improving health, free from cancer.

The moms hope that the tradition continues for years to come, as a yearly celebration of their collective strength in evading cancer and fostering friendship in hardship.