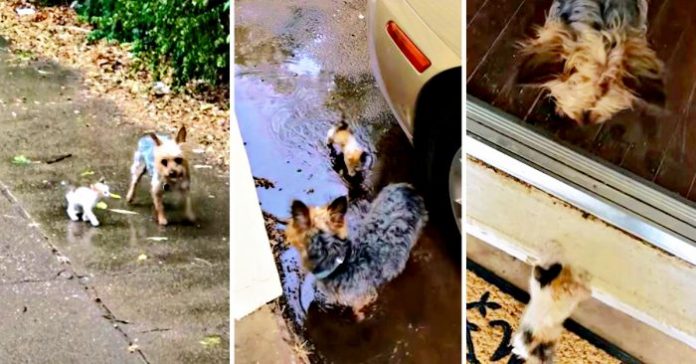 Typically, dogs and cats most likely wanted to start a fight as soon as they see each other. But that is not the case with this dog name Hazel, as it clearly shows how animals didn’t just have feelings, but they have compassion and sympathy too.

While Hazel was walking under the rain, it realized that there’s an abandoned kitten in trouble. The small little kitty was under the heavy rain, just like itself, but having a harder time as it was smaller and weaker. So Hazel didn’t hesitate to rescue the poor kitten.

Before the incident, Hazel’s owner Monica Burks was looking for Hazel and getting worried as her dog didn’t show up. Burks was panicking as the rain was getting heavier.

Suddenly, Burks saw Hazel walking with a kitten – both drained in the heavy rain.

Hazel looks like it was showing a way home to the kitten as they walked together.

The kitten sometimes hesitant to follow Hazel, but the dog just turned to it as if persuading the kitten to follow its lead.

So the kitten would continue to follow Hazel and finally arrive at the home.

Upon arriving, the little kitty is having a hard time once again as it was quite difficult for its small frame to take the stairs.

This time, Hazel helped the kitten again by pulling its neck so it can get up the stairs.

Hazel’s kindness didn’t stop there as it later licked the kitten’s body to clean it, just like a mother pet would care for its baby.

Looking at how comfortable both of them with each other, Burks decided to keep taking care of the kitten and named it Sheba.