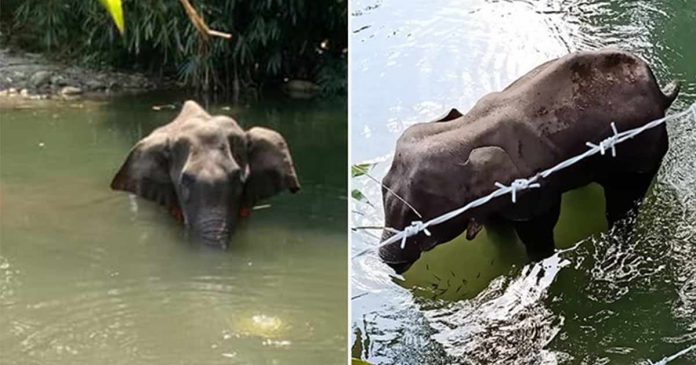 It is hard to imagine how some people are just heartless and blatant evil. Recently, a pregnant wild elephant died standing in the river in Kerala, India, as it tried to soothe its excruciating agony after allegedly being fed with a pineapple stuffed with firecrackers by irresponsible villagers.

As the elephant ate the pineapple, the firecrackers inside was said to explode in its mouth, causing injuries to its tongue and mouth.

The explosion also causing injury in its lower jaw and definitely causing unimaginable suffering to the poor animal.

Mohan Krishnan, who was part of the Rapid Response Team to rescue the elephant, wrote on Facebook that the elephant had left the forest and was roaming in the nearby village to find food on May 23rd, but unfortunately fed with firecracker-stuffed pineapple by the locals.

“She trusted everyone. When the pineapple she ate exploded, she must have been shocked not thinking about herself, but about the child that she’s going to give birth to in 18 to 20 months,” said Krishnan.

“She didn’t harm a single human being even when she ran in searing pain in the streets of the village. She didn’t crush a single home. This is why I said, she is full of goodness,” added Krishnan in his emotional note on Facebook.

As the firecrackers explode in its mouth, the elephant was in pain, but it didn’t harm any single human and just trying to look for water. The elephant walked up to the Velliyar River on May 24th and merely stood there, probably to soothe the pain in its mouth.

While the elephant was trying to soothe its pain, it was discovered by Krishnan and his team. They later brought two captive elephants, named Surendran and Neelakanthan, to lead the injured elephant out of the river, in order to rescue it. But after hours of attempts by the team, the elephant unfortunately died at 4pm on May 27th.

The pregnant elephant died standing in the river with her mouth and trunk in the water.

“But I think she had a sixth sense. She didn’t let us do anything. She needs to be given the farewell she deserves. For that, we took her inside the forest in a lorry. She lay there on firewood, in the land she played and grew up,” said Krishnan.

“The doctor who did post-mortem told me that she (the elephant) was not alone. I could sense his sadness though the expression on his face, although it was not completely visible due to his mask. We cremated her in a pyre there. We bowed before her and paid our last respects.”

The elephant was taken back inside the forest in a truck to be cremated by the forest officials. Indian police have also arrested a plantation worker involved in feeding the firecrackers to the elephant and are still hunting for two others.