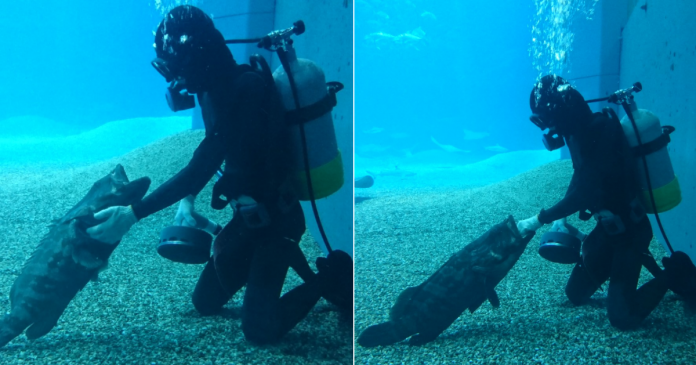 Unlike humans, animals have a special way of asking for attention. Pets like cats and dogs just go up to their owners and give them a longing stare or rub against their body to indicate that they need some pampering.

Aquatic animals on the other hand, are not widely known to express or demand such emotions. When a brown grouper in the Osaka Aquarium swam its way to the diver on duty and rub itself against his body, a spectator who was watching the scene in disbelief knew he had to get it on camera.

The video shows the diver, in his full suit surrounded by large tubes of hose used to clean aquariums as well as fishes swimming casually around him.

As he was moving the hose around, it can be seen that a medium-sized fish maneuvering its way through the other fishes towards the man.

At first glance, it looked like the fish was about to attack him but as it approached closer, it slowed down its pace and started wriggling its body and tail upon seeing him.

Uncommon as it looks, the diver then goes ahead to ‘pet’ the brown grouper by running his hand across its body. It seemed as if the fish was mimicking the behavior of a dog.

It was later found that the fish is one of the 18 brown groupers inhabiting the Osaka Aquarium. Apparently, 4 or 5 of them are close to the divers and will approach them to demand their body cleaned, which to us appear like they want to be pampered.

In rare cases, dolphins and some sharks are known to identify humans that feed them and tend to remember and recognize them for a long time. For a grouper to do that is extremely unlikely, but we learn something new everyday.

Aquarium divers are not just restricted to cleaning tanks, they are also responsible for the maintenance of the aquarium inhabitants’ health and are sometimes required to perform acts underwater to attract visitors.

Therefore, it is completely understandable that the grouper has formed a special bond with the human who feeds and takes care of it.

A Young Filipino Boy Bravely Jumps into a Creek to Save...