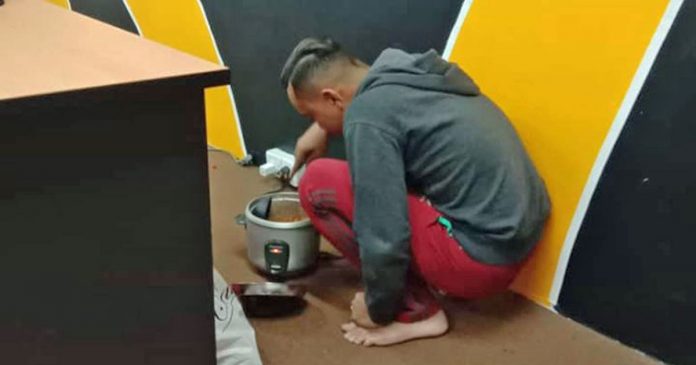 In a touching story posted by a Malaysian entrepreneur on his Facebook account, Azri Walter shared about one of his employees who cooked rice in the office in an attempt to save money for his widowed mother.

According to Azri, it began when he entered the empty office when he noticed that the light was on.

Baffled by Habil’s action, Azri then asked why he chose to go to extra lengths to save money when he had just earned RM1000 (US$238) that week.

Habil later explained that he wanted to save the money he earned over to his widowed mother who lives in another state.

According to Habil, his mother never asked him to send money to her but he felt responsible to help her out as his father was long gone

“She never asked for it but I feel bad for her. If I give her this money, she can use it to buy clothes, food, and use it for my younger siblings as well,” the Malay Mail reported.

Touched by Habil’s words, Azri tried to hold back his tears and invited him to join him for a meal to which Habil politely refused.

“I hugged him and said, ‘It’s okay, I’ll join you for a meal. We’ll eat together, okay?’” Azri wrote. “I went downstairs to buy some food and joined him once again to have dinner,” he added.

According to the businessman, it was not just what Habil did that moved him. It was his words that the loving son said regarding his widowed mother.

“The words he said that truly left an impact on me were, ‘It’s okay, sir. I don’t know how much longer my mum will be around. While she’s still here, I want to make her happy. I don’t have anyone else to look after, so it’s fine,” Azri recalled Habil’s words.

“‘Furthermore, I’m good at making a living on my own each day.’”

In his post, Azri shared that Habil was only 19 when he decided to move to the city to earn a living and support his family.

He ended his post by sharing a reminder to everyone to be good to their parents just like Habil did to his mother.

His post has garnered 18,000 likes and 1,600 comments since it was first posted on October 21 with many netizens praising Habil for being a doting son.