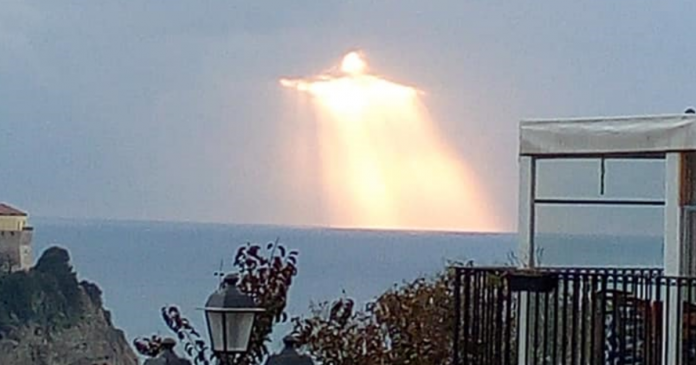 Certain things in life are truly inexplicable. Take, for example, the mysteries of the vast universe or the unanswered question of why your dog had to bring home the dead carcass of a squirrel from the garden every day without fail.

What we do know is that despite the lack of reasons and answers, we acknowledge and accept these uncertainties in full faith. Just like what Alfredo Lo Brutto did.

He was just having another regular day at Agropoli, Italy when he saw something spectacular in the clouds above him. The sky was a majestic hue of blue overlooking the sea and there shone a white silhouette of a familiar figure outlined in streaks of bright orange rays.

He promptly captured a photograph of the unbelievable view and shared it online. Alfredo claimed that the cloud figure was an uncanny resemblance of Christ the Redeemer.

“I was enchanted by the view. I don’t often share pictures on social media, but when I took this one, I instantly felt like I wanted other people to see it, because it was so beautiful,” Alfredo speaks of of his feeling to Daily Mail.

The image taken at the Tyrrhenian Sea has caused some heated debate on the internet concerning its ambiguity. Though it looks somewhat similar to the statue of Jesus in Rio De Janiro, Brazil, netizens couldn’t help but be skeptical about it.

As for Alfredo, he truly believes in the image he witnessed and marveled enough for him to get a picture of it. As he shares, he is not one to share posts or views on social media but this one takes the cake.

While half the people who have seen the image online sticks firmly to the argument that the figure clearly bears some significance, the other half rebuts that it’s a classic case of optical illusion paired with the perfect play of lights.

Regardless of the views, it’s undeniable that the picture is a beautiful documentation of the wonders of nature, and perhaps a force higher than us for those who want to believe in something.

Hilarious video of three unsuspecting cats get the scare of their...