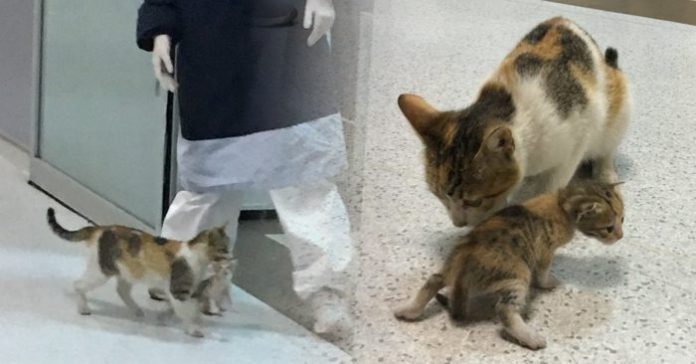 Cats are known for enjoying solitude. However, cats change their behavior after having children and just like humans, cats also have a maternal instinct when raising their children.

This became evident when a mother cat recently appeared at a hospital located in Istanbul, Turkey. Surprisingly, the cat was holding a sick kitten in its mouth.

Some photos were uploaded by a user on Twitter using the @ozcanmerveee account name . According to her, while she was waiting in the emergency room of the hospital, a cat walked in out of nowhere with its weak child.

The mother cat apparently had a skinny body, so was her kitten. Perhaps the kitten was not feeling well, so the cat took her to the hospital, hoping that it would be accepted for treatment.

While walking into the hospital, the adult cat stopped in front of a health worker in a personal protective equipment (PPE) as if to say, “My child is sick, please check”.

The other medical staffs then quickly surrounded the cat and her kitten, which seemed to have made her feel a little relieved. But the mother did not want to leave her child. She was waiting patiently while her child was being attended by the staffs.

The mother was then provided with food and milk before they were transferred to the veterinary clinic. The clever gestures of the cat really opened the eyes of Istanbul residents who admired the mother’s efforts to save her child.

It turns out that a mother’s love goes beyond everything, regardless of teir species. When needed, they would most certainly seek help from the right places.